The Toronto Zoo is Canada’s largest zoo and one of the largest zoos in the world. A living center for education and science, it is committed to protecting wildlife to ensure a rich natural diversity for future generations.

The zoo has over 5,000 animals, representing over 450 species and spread over 710 acres. You might witness animal feedings, breeding activities or other natural behaviors at any time while exploring its six miles of trails.

Exhibits at the Toronto Zoo

The Discovery Zone, for kids, includes Kids Zoo, Splash Island and the Waterside Theater: At Kids Zoo, children interact with alpacas, goats, rabbits and other animals. Splash Island is a two-acre water play area. The Waterside Theater has two ongoing shows, “Canadian Conservation”, which highlights Canadian wildlife, and “A Bird’s Life”, about birds. During these family-friendly performances, animals and birds show off around, over and within the audience.

The zoo’s exhibits are divided into seven geographic regions: Indo-Malaya, Africa, the Americas, Australasia, Eurasia, Canadian Domain and Tundra Trek. Animals are displayed indoors in tropical pavilions and outdoors in naturalistic environments, with viewing opportunities at many levels.

The Indo-Malaya area is home to tigers, orangutans, clouded leopards and greater one-horned rhinos, including calf, Kiran, born in January 2018. Huge Aldabra tortoises, measuring up to 5 feet long and over 400 pounds, live inside the African Rainforest Pavilion, which also houses ring-tailed lemurs and pygmy hippos. The Gorilla Rainforest has a western lowland gorilla troop. There’s a new Blanding’s turtle exhibit inside the Americas Pavilion. Hippos, giraffes and white lions live on the African Savanna, and the 10-acre Tundra Trek features a polar bear habitat with an underwater viewing area. In addition, there are over 100 species of fish throughout the zoo, including moon jellies and seahorses in the Australasia pavilion.

The zoo also has four rides – Gorilla Climb Ropes Course, Zoomobile, Conservation Carousel and Tundra Air – and a new state-of-the-art Wildlife Health Center, where you can glimpse of the work done by the zoo behind-the-scenes to keep its animals healthy.

Take Amtrak to the Toronto Zoo

Take Amtrak to Union Station (TWO) in Toronto. Don’t forget to use the New York By Rail 15% discount!

Staying in the area? Get picked up from Toronto’s Union Station and to your reserver NYTRAIN Enterprise Rent-a-Car. Click here to reserve your car, or call the Toronto office today at: 416-425-3777. 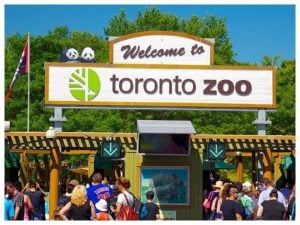