Times Square covers five blocks of attractions, theaters, restaurants, and stores at the “crossroads of the world.” Its current name was changed from Longacre Square in 1905 to Times Square when Adolf Ochs, owner of the New York Times, built the Times Tower between Broadway and Seventh Ave. Times Square recently underwent a cutting-edge redesign, starting in 2012 and completing in 2016, to provide additional space for visitors and events, update infrastructure, and modernize the look and feel of the piazza.

Things to Do in Times Square

There is never a dull moment in Time Square, as there is truly something for everyone to enjoy. Smash Broadway hits like the Lion King continue to be performed nearby. Famous retailers like Lids, Sephora, Sunglass Hut, Gap, Steve Madden, and even Disney have outlets lining the streets, making it a destination for any shopper. Time Square offers a wide diversity of culinary options. World class Italian restaurants like Carmine’s, exotic Cuban lounges like Havana Central, sushi bars like Blue Fin, and fast-food staples like Shake Shack serves visitors a taste of why New York City is known as the “Capital of the World.”

Things to See in Times Square

Times Square is consistently a focal point for major events in New York City. The globally-popular New Year’s Eve Ball Drop is held annually. This tradition dates back to the name itself and attracts visitors from all over the world. The Times Square Alliance hosts many other yearly events, like live performances and concerts. There are attractions suitable for the entire family, including Madame Tussaud’s Wax Museum, Ripley’s Believe it Or Not, M&M World, Hard Rock Cafe, and the new Gulliver’s Gate world of miniatures. The TimeCenter houses an auditorium for presentations and events. The bright, colorful billboards and skyscrapers make the famous crossroads a constant feast for the eyes.

“No matter how many times you visit it never stops amazing me how awesome this place is. The energy and bright lights just take your breath away.”

Getting to Times Square

Visit Times Square via Amtrak to Penn Station in New York City—Don’t forget to use the New York By Rail 15% discount! 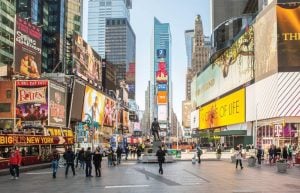 At "the crossroads of the world," Times Square covers five blocks of attractions, theaters,…