The famous Apollo Theater has been honoring and promoting the contributions of African American performers since 1934. The Apollo also proudly prioritizes programming that supports culturally diverse artists based in the United States and internationally. The theater was officially designated a New York City Landmark in 1983 and welcomes 1.3 million visitors each year.

Amateur Night at the Apollo

The Apollo houses musical, dance, theatrical and spoken word performances as well as its well-known Amateur Night. This longstanding tradition helped launch the careers of artists including Jimi Hendrix, Billie Holiday, Stevie Wonder, and Diana Ross & The Supremes. This tradition continues today and the audience has a hand in deciding who wins the grand prize.

In 2013, the Apollo created a new tradition with a biennial global festival. Each festival focuses on a different theme and brings artists from the United States and around the world together to learn and contribute to the festival in a variety of ways. In 2021, the festival was virtual and was part of the international Women of the World Festival, with the theme Black Women Transcending. The Apollo Theater looks forward to having the festival in person once again in 2023.

The Apollo is also dedicated to education, offering many programs in the local community. In addition, the theater offers virtual programs through their Digital Stage for people to learn more from their homes. This includes the Live Wire Series, which is dedicated to honoring iconic artists like Aretha Franklin and Hazel Scott. Those interested can also view the Spring Benefit and other performances on this platform.

In the spring of 2022, the Apollo Theater will make a historic change, physically expanding for the first time. The new Apollo’s Victoria Theater will allow the nonprofit to build on its programs in an uptown location containing two new theaters with 298 seats combined.

“The Apollo has probably exerted a greater influence on popular culture than any other entertainment venue in the world.”

—Ted Fox, “Showtime at the Apollo”

Take Amtrak to the Apollo Theater

Visit The Apollo Theater via Amtrak to Penn Station in New York City—Don’t forget to use the See New York and Save 15% discount!

From 34 Street-Penn Station take the A subway train to 125th Street Station. Then it’s just a quick, .2 mile walk to the Appolo Theater. 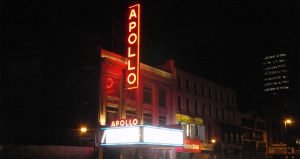