The oldest neighborhood in the city, this unique neighborhood is home to more than 40 pre-Revolutionary houses and has been continuously inhabited for over 300 years.

The Stockade District is Schenectady’s oldest neighborhood in the city and New York’s first local historic district. The District contains a wide variety of Dutch and English 17th- and 18th-century buildings. The National Park Service has described it as “the highest concentration of historic period homes in the country,” with over 40 buildings older than 200 years!

The Stockade District was listed on the National Register of Historic Places in 1973. The Historic Stockade Association works to organize residents and help preserve not only the historic nature of the neighborhood, but its sense of community. The Historic Stockade organizes tours and other special events in the neighborhood, including open houses, Halloween trick-or-treating, and a holiday tree lighting ceremony.

“You will have a great afternoon of strolling and sightseeing! You’ll pass historic churches, gardens, and the homes of politicians, patriots, and businessmen.”

Experience Stockade Historic District via Amtrak to Schenectady Station in Schenectady —Don’t forget to use Amtrak’s See New York and Save 15% discount! 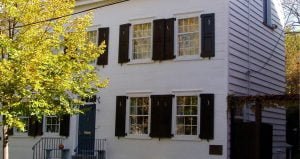