The National September 11 Memorial honors the lives of those that were lost in the devastating tragedies that took place on Sept. 11, 2001, at the World Trade Center, the Pentagon, and near Shanksville, PA. The immense structure also pays respects to those that were killed in the 1993 bombing of the World Trade Center. A design competition among over 60 nations inspired the memorial’s design. Michael Arad, the architect who won the contest, designed the memorial with Peter Walker and started construction in 2006.

The September 11 Memorial stands at the site of Ground Zero, occupying eight of the 16 acres at the World Trade Center. In the footprints of the twin towers, the September 11 Memorial holds two giant waterfalls and reflecting pools surrounded by a grove of swamp white oak trees. The names of every person who died in the attacks line the exterior of these pools. In addition to the memorial’s powerful homage to the victims, its design conveys a “spirit of hope and renewal.” The memorial’s pools collect and conserve rainwater, making it one of the most eco-friendly plazas ever built.

The Memorial Exhibition shows portrait photographs of the  2,983 victims, with touch-screen tables presenting individual profiles on each person with audio renderings from their family and friends. The September 11 Memorial Museum also seeks to tell the stories of the survivors, of their losses and triumphs in the aftermath of the tragedy. A rotation of exhibits achieves this through art, photographs, artifacts, short films, etc. Tours include exhibits of salvaged items, structural forms, and personal mementos, as well as an interactive timeline of the day’s events.

The National September 11 Memorial Museum is built within the remnants of the original World Trade Center Site. It tells the story of the attacks and their aftermath through personal stories of loss, compassion, and recovery. The 110,000 square feet of display space utilizes multimedia resources to convey these intensely emotional narratives, and to demonstrate the victory of human dignity over human degradation.

Getting to the National September 11 Memorial and Museum

Visit the National September 11 Memorial via Amtrak to Penn Station in New York City—Don’t forget to use the New York By Rail 15% discount! 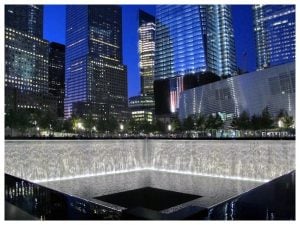 The National September 11 Memorial and Museum focus on stories of survival, recovery, and…