Dive into the beginnings of American history by touring the magnificent Schuyler Mansion, perched right over the Hudson River.

The History of the Mansion

Descending from rich Dutch families, Philip J. Schuyler and his wife, Catharine Van Rensselaer, raised eight children in this home. The Georgian structure of the mansion reflects Schuyler’s English tastes. Also, Schuyler built it on a bluff overlooking the Hudson River. The grounds once included an orchard, a formal garden and a working farm. Throughout the Schuyler family occupancy from 1763-1804, the mansion was used for military strategizing, political gathering, social affairs and family living.

Schuyler Mansion is open for guided tours. Additionally, an orientation exhibition focusing on Schuyler’s life is available in the Visitor Center. Temporary exhibitions and public programs are scheduled year-round.

“What an amazing experience! The staff was amazing! I loved seeing the passion on the tour guys face as he explained everything. The house was beautiful. I highly recommend coming here to anyone who has a passion for American History!”

Take Amtrak to the Schuyler Mansion

Experience this unforgettable mansion via Amtrak to the Albany-Rensselaer Station in Albany—Don’t forget to use the Amtrak See New York and Save 15% discount! 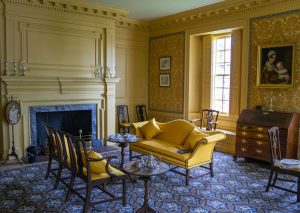 Dive into the beginnings of American history by touring the magnificent Schuyler Mansion,…