The Schenectady Ale Trail is perfect for all beer-lovers visiting the area. Enjoy one beer flight at each of the six schenectady county breweries.

This ale trail is any beer-lovers dream. Starting the trail is easy – passes are delivered instantly to your phone for groups to start the trail as soon as they would like. The digital ticket grants you one beer flight, consisting of four to five tasting, at each of the six breweries.

Each pass costs $40, which can easily be purchased online. If you complete the entire ale trail, there is an opportunity to score a free t-shirt.

“We stopped in [Great Flats Brewing] as part of the Schenectady Ale Trail and glad we did. Really nice tasting room and friendly beertenders. Really like that they have different size pours.”

Experience this unforgettable attraction via Amtrak to the Schenectady Station in Schenectady. Don’t forget to use the New York By Rail 15% discount!

Where to Stay in Schenectady

Looking for a getaway opportunity? Spend the night and experience all Schenectady has to offer. Take a look at these great hotel options—some offering exclusive New York By Rail discounts! 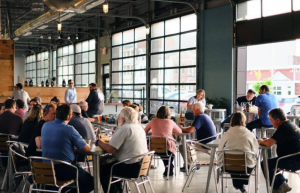 The Schenectady Ale Trail is perfect for all beer-lovers visiting the area. Enjoy one beer…