Experience Christmas Spectacular with the Rockettes at Radio City Music Hall when you travel on Amtrak in to New York City during the holiday season.

The Radio City Christmas Spectacular is an annual musical holiday stage show performed at Radio City Music Hall in New York City. A must-see each holiday season, the 90-minute performance features more than 140 performers and an original musical score, combining singing, dancing and humor with traditional scenes. The highlight each year is the women’s precision dance troupe, the Rockettes, performing at Radio City Music Hall since 1933! Radio City continues the Christmas tradition for the 2018/2019 season from November 9, 2018 to January 6, 2019.

For 80 years, the Christmas Spectacular, starring the Rockettes, has continued to create lasting memories for generations of families that have made this cherished show a holiday tradition. Since 1933, the Christmas Spectacular has played at the famed Radio City Music Hall and today’s show still features beloved favorite numbers, including “Parade of the Wooden Soldiers” and the “Living Nativity”, which have been performed since its inception.

Since 1933, the tap dancers, flying Santa and of course, the 36-strong world famous dance troupe, the Rockettes have put on one of the city’s most classic Christmas spectacles. Expect a series of stunning dance vignettes that includes a living rendition of The Nativity featuring real camels, sheep, and donkeys! See the Rockettes version of The Nutcracker, complete with life-sized teddy bears dancing with Clara. And don’t forget the great man himself, Santa Claus, drawn on a sleigh by a team of reindeer to conduct the glorious kickline of “12 days of Christmas” where the Rockettes are decked with holly and gold costumes.

“This show always amazes me. So well put together and very festive. After all it’s not Christmas unless you see the Rockettes. I took my two granddaughters, age 7 & 9 for the first time and same results. They loved it too. A must-see during your Christmas experience in NYC.”

Experience the legendary Radio City Christmas Spectacular via Amtrak to Penn Station in New York City—Don’t forget to use the Amtrak See New York and Save 15% discount!

Uber, Lyft and New York City Taxi are all available from Penn Station, too. 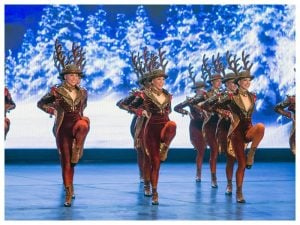