Right on the border of the most recognizable park in New York City, Central Park, is the ever so famous and oldest museum New York Historical Society Museum and Library.

Founded in 1804, the New York Historical Society Museum and Library is the oldest museum in New York City. The museum explores the vast cultural, political and social history of Central Park, New York City, New York state, and the United States. The museum has always made strides to be a national forum for discussion of what issues history has imposed on culture. The offer that they have some of the world’s greatest pieces of art, historical artifacts, and artifacts and documents that formed New York and the United States in the 19th century and older!

The New York Historical Society Museum and Library has many different places to learn and explore for children and adults of all ages. The DiMenna Children’s History Museum presents 350 years of New York history. There are historical characters, interactive and digital exhibits and games, and the Barbara K. Lipman Children’s History Library. The target age is 8-14 years old but is the ultimate experience for the family to engage in together. There is also the Gilder Lehrman Collection which is home to 60,000 manuscripts, documents, notes, photos, letters and books from early New York, and America as old as the Civil War.

This exhibit highlights the origins of being an American Citizenship. Becoming a naturalized citizen in a new country back in the 18th and 19th centuries was much different than it is today, and located in the Patrica D. Klingenstein Library on display. In the library will be a large number of documents, photos and flyers from the early days of immigration.

This is an exhibit that has toys and trains found in the Jerni Collection and is fun for the whole family! There are model trains that expand throughout the whole section of the museum. Along with the model train sets, there are large projectors that display holiday-themed images and videos.

“There is no way you can pass this recommendation to indulge yourself with rich stories of New York and American history.”

Getting to the New York Historical Society Museum and Library

Experience the New York Historical Society Museum and Library via Amtrak to Penn Station in New York City—Don’t forget to use the New York By Rail 15% discount! 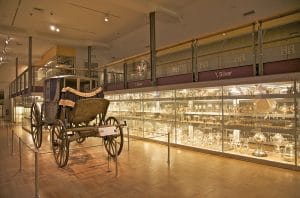