Museum of Food and Drink

In Brooklyn's Williamsburg, learn eating and drinking's history, culture and science—and sample the exhibits at the Museum of Food and Drink.

Food is culture. Discover why at the Museum of Food and Drink. MOFAD is New York’s first museum that brings the world of food to life with exhibits you can taste, touch, and smell. Inspiring public curiosity about food, what it means, and how it connects with the world around us, MOFAD is to be the world’s premier food museum and a global educational resource that encourages generations of inquisitive eaters of all ages and backgrounds.

Stroll through and satisfy your taste buds at the MOFAD lab. The 5,000-square-foot experimental space in Williamsburg, Brooklyn houses Chow: Making the Chinese American Restaurant, its current exhibition. Chow celebrates the birth and evolution of Chinese American restaurants, tracing a nearly 170-year history, sparking conversation around immigration, cultural identity, and what it means to be American. Discover how Chinese Americans persevered despite racism and exclusionary laws, to create one of America’s most beloved cuisines.

Past Exhibitions at the Museum of Food and Drink

Flavor: Making It and Faking It

You know the delicious flavors of your favorite foods? It turns out they can be simulated without any foods at all. Using science and technology developed by the flavor industry, taste and smell your way through the story of the $25 billion industry. Flavor, the debut exhibit of the MOFAD Lab, was a tasting and smelling adventure that provoked the senses, revealed a critically important part of the food industry, and raised questions about what “natural” and “artificial” really mean.

BOOM!: The Puffing Gun and the Rise of Cereal

BOOM! featured live-action demonstrations of the puffing gun—the workhorse of the breakfast cereal industry during the first half of the 20th century—with tastings of freshly made puffs. Visitors learn about the science behind every puff and the puffing gun’s key role in the larger narrative of breakfast cereal’s rise from obscure health food to global, multi-billion dollar industry.

“One of the biggest openings of the year in the food world just landed in Brooklyn and it’s not a restaurant.”

Getting to the Museum of Food and Drink

Experience the MOFAD via Amtrak to Penn Station in New York City—Don’t forget to use the New York By Rail 15% discount! 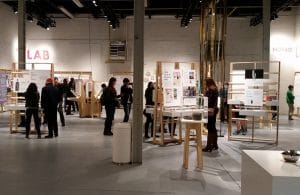 Museum of Food and Drink