Experience 5,000 years of creation at the Metropolitan Museum of Art on New York City's 5th Ave. — just a subway ride from Penn Station.

Founded in 1870, the Metropolitan Museum of Art was created to have a museum and library of art so people can not only study and admire the artwork but also see how art can and does function in everyday life. Today there are three iconic Met lives in three different locations, The Met 5th Ave. (the original), The Met Breuer, and The Met Cloisters. Each of which highlights the best and most iconic pieces from 5,000 years ago until today. Their mission is to show the crossing of cultures, ideas, and creativity through different cultures, nations, and eras.

Plan Your Visit to the Met

The Met’s admission is donation based, and they have their suggested donations on the site. You can purchase your tickets online, and even set up a group visit, which is perfect for families, classes, or groups of co-workers. Another great offer that the Met has is their own audio guide. For a small fee of $7 for the adult’s guide and $5 for the children’s guide, guests can hear a curator talk you through each piece in great detail so they have a perfect idea of what masterpiece they are viewing. Be sure to check out which exhibits and collections are up before you go! The Met is also part of New York City’s famous and beautiful Museum Mile, that highlights some of the best museums that New York has to offer.

This exhibition presents a stunning range and number of works by Michelangelo. Gaze at 133 of his drawings, three of his marble sculptures, his earliest painting, his wood architectural model for a chapel vault, as well as a substantial body of complementary works by other artists for comparison and context. Among the extraordinary international loans are the complete series of masterpiece drawings he created for his friend Tommaso de’ Cavalieri and a monumental cartoon for his last fresco in the Vatican Palace. Selected from 50 public and private collections in the United States and Europe, the exhibition examines Michelangelo’s rich legacy as a supreme draftsman and designer.

This collection focuses on European drawing from the Renaissance until the 20th century. Most of the drawings come from the Robert Lehman Collection, and it sheds light on the how and what the 20th-century collector, Lehman, was interested in. There are pieces here by master artists like Leonardo da Vinci, Dürer, Rembrandt, Tiepolo, Ingres, Seurat, and Matisse and many more. Follow the hashtag #MetMasterDrawings for updates.

Being that the Thomas Cole National Historic Site is located in New York, it makes sense that there be a Thomas Cole exhibit at The Met. Pieces like The Oxbow (1836) and his five-part series The Course of Empire (1834–36) will be on display for the first time to show Cole’s transatlantic life. This will open to the public on January 30th, 2018 and remain open until May 13, 2018

In order to allow viewers to explore some the Met’s most iconic spaces, the museum created a series of six short videos. The series was created with spherical 360° technology to showcase the museum’s art and architecture like never before. To watch this award-winning series, visit the Met’s official website today.

“If I had to choose a single destination where I’d be held captive for the rest of my time in New York, I’d choose the Metropolitan Museum of Art.”

Getting to the Metropolitan Museum of Art

Experience The Met via Amtrak to Penn Station in New York City—Don’t forget to use the New York By Rail 15% discount! 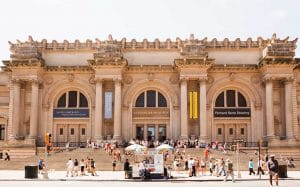 Experience 5,000 years of creation at the Metropolitan Museum of Art on New York City's 5th…