An award-winning brewery with a collection of unique beers, all served at the legendary jazz lounge and one of the top "listening rooms" in the U.S.

Guests can view the open-glass brew house from The Van Dyck restaurant while enjoying a meal and choosing from over 10 house taps, local offerings, and select draft accounts.

The restaurant is considered a historical venue, boasting a fantastic menu. On the menu are appetizers, pizzas, entrees, salads and sandwiches. Some of the delicious menu items include Loaded Pierogies, Tuscan Chicken Pizza, Mad Jack Mac & Cheese, the Stockade Salad and a Sweet & Spicy Burger.

Considered one of the top “listening rooms” in the United States, performers at The Van Dyck often say it’s like playing in a studio, and jazz legend Elvin Jones called it “The best sound I’ve ever heard in my life.”

“This place is a gem in the area, they brew their own beer and have some great food selections!”

Take Amtrak to Mad Jack Brewing at the Van Dyck

Experience Mad Jack Brewing at the Van Dyck via Amtrak to  Schenectady Station in Schenectady —Don’t forget to use Amtrak’s See New York and Save 15% discount! 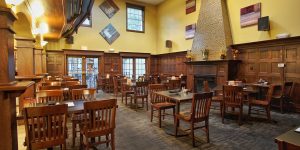 An award-winning brewery with a collection of unique beers, all served at the legendary…