Constructed in September 1757 for use during the French and Indian War, Fort William Henry is now a museum where history comes alive.

At the Fort William Henry Museum, you can celebrate the Battle of Fort William Henry on Lake George’s southern shore. The historic locale was the site of several conflicts between British troops, French Troops, and Native American forces.

Step back to 1757 as two world powers fought for control of North America. Interact with the fort’s soldiers to learn the importance of not permitting French forces to move south from this point. Hear the commands of firing the musket and the roar of the cannon during the military demonstration.

Following each Military Demonstration, children are invited to “Join the King’s Army”. Each child is provided a musket, waistcoat and tricorn hat and will learn the commands to shoot their musket, march with the fort’s soldiers and fire at the enemy! After their training, they will be enlisted into the King’s service and receive their certificate and wages for the day!

The museum buildings contain hundreds of artifacts found during archeological digs at Fort William Henry and the surrounding area. Artifacts range from buttons and coins to musket balls and mortar fragments from the siege. Exhibits and artwork, along with the knowledgeable staff, explain the daily life of the fort’s soldiers, camp followers and Native American allies.

The area surrounding Fort William Henry has been the scene for countless battles, terrible disease and harsh climate.  With hundreds of years of history, there are bound to be some ghost stories. See the equipment used by investigators in their quest to research paranormal activity and hear the stories that have been handed down over the years, as well as the personal experiences of those leading the tour. Tour requires walking, stairs and dark places. Reservations by phone required.

Fort and Museum Hours of Operation

Enjoy a peek at the French and Indian War from New York via Amtrak to Fort Edward Glens Falls Station in the Adirondacks—Don’t forget to use the See New York and Save 15% discount!

Get picked up from Fort Edward Glens Falls Station and taken to your reserved #NYTRAIN Enterprise Rent-a-Car. Click here to reserve your car or call the FED office today at: 518-745-5020. 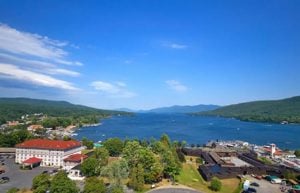