Experience KING KONG a gripping and spectacular story of unlikely friendship, unshakable courage, and breaking free from the cages others put us in.

The epic modern myth comes alive on Broadway through an innovative mix of animatronics, puppetry, music and stagecraft! It’s 1931, the world is in the grip of the Great Depression, and New York City is a place of pressure, of desperation, but also of hope. Enter Ann Darrow, a fearless young actress with a will of steel and dreams that reach as high as the just-completed Empire State Building. After a brutal struggle just to stay on her feet, Ann finds her big break in the form of Carl Denham, a fast-talking filmmaker who promises to make her the star of his next big adventure movie. Throwing caution to the winds, she joins Carl on a voyage to the mysterious Skull Island. There, they encounter a wonder more astonishing than they could have possibly imagined: a 20-foot-tall, 2,000-pound ape known only as Kong.

To her surprise, Ann finds an unexpected kindred spirit in this magnificent, untamable creature. But when Carl hatches a plan to capture Kong and display him to the New York masses, she’s faced with a terrible choice. Will Ann follow the call of her own ambition? Or can she find the strength to stand up for what’s right? Roaring with heart-pounding action, KING KONG is a gripping and spectacular story of unlikely friendship, unshakable courage, and breaking free from the cages others put us in.

Directed and choreographed by Olivier winner Drew McOnie, KING KONG features an electrifying new score by Marius de Vries (La La Land) and Eddie Perfect (Beetlejuice The Musical), and a book by Jack Thorne, the Tony® and Olivier Award-winning writer of Harry Potter and the Cursed Child. Don’t miss this exhilarating, emotional encounter with a legend that’s always been too big to contain.

Experience King Kong via Amtrak to Penn Station in New York City —Don’t forget to use Amtrak’s See New York and Save 15% discount! 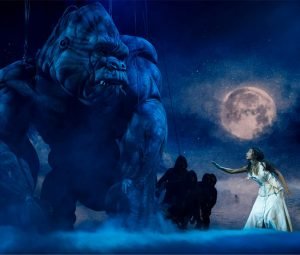