Katz’s Deli made its iconic mark on the Lower East Side of Manhattan in 1888 when the Iceland brothers opened up a small deli. Enter Willy Katz in 1903, and the name of the store was officially changed to “Iceland & Katz”. Willy’s cousin Benny joined him in 1910, buying out the Iceland brothers, officially forming Katz’s Delicatessen. Katz’s Deli then moved across the street, where it resides today, during the construction of the subway system.

Each week thousands of visitors from around the world flock to Katz’s to dine in this legendary and iconic deli. Guests rave about the delectable sandwiches, platters and meats. “New Yorkers have made Katz’s Delicatessen what it is” by making Katz’s an inherent part of the city’s culture and history. Visitors spread the word, bring their friends in, write books, shoot films, and keep coming back for a pastrami on rye.

Smoked to juicy perfection and hand carved to your specifications. Ask for mayo at your own peril. $21.45

Half Sandwich with Matzo Ball Soup

Our secret “dry cure” pickling formula requires a full month to be ready to serve. The secret to finishing one is to pace yourself! $20.45

“Katz’s is an icon and well worth a visit for the pastrami as well as for the experience.”

Enjoy an iconic Katz sandwich from New York via Amtrak to Penn Station in New York City—Don’t forget to use the New York By Rail 15% discount! 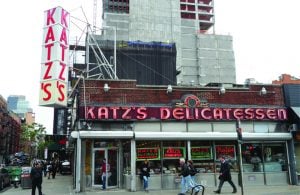 Serving mile-high sandwiches since 1888, try the legendary pastrami, corned beef and other…