They were just four guys from Jersey, until they sang their very first note. They had a sound nobody had ever heard… and the radio just couldn’t get enough of. But while their harmonies were perfect on stage, off stage it was a very different story — a story that has made them an international sensation all over again. Don’t miss Jersey Boys at New World Stages.

From the streets of New Jersey to the Rock and Roll Hall of Fame, this is the musical that’s just too good to be true. Featuring some of the biggest hits in music history, including “Sherry,” “Big Girls Don’t Cry,” “Walk Like A Man,” “Can’t Take My Eyes off of You,” and “Oh What A Night,”  this blockbuster musical takes you behind the music and inside the story of Frankie Valli and The Four Seasons. The Tony, Grammy, and Olivier Award-winning Best Musical, this is the show that, for more than a decade, has brought millions of theatregoers to their feet night after night after night.  As the New York Times says, “the crowd goes wild.”

Experience the unforgettable Jersey Boys at New World Stages via Amtrak to Penn Station in New York City—Don’t forget to use the I Love New York 15% discount! From Penn Station, Jersey Boys at New World Stages is accessible via the A, C, or E subway trains to 50 Street Station. From 50th Street Station, walk west along 50th Street between 8th Avenue and 9th Avenue (one-minute walk). 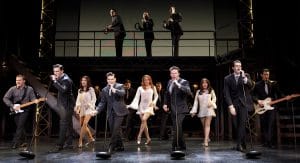