There are over 150 acres to explore at this conservatory, including a garden honoring William Shakespeare's talent. Flowering pears and tulips will be ready for early May, followed by crabapples and flowering dogwood.

With over 150 acres to explore, you will have plenty of natural beauty to take in at these gardens. You can head to the Poet’s Garden, also known as the Woodland Garden, which was created in 1916 to celebrate the 300th anniversary of William Shakespeare’s death. With plants referred to in Shakespeare’s writings and quotes from his plays, you will feel like you’re part of Romeo and Juliet.

Highland Park Conservancy is one of the oldest arboretums in the country that is also open to the public.

Every season at the Highland Park Conservancy has something uniquely beautiful to offer. Whether strolling through snow-covered hills or green valleys, this garden has several attractions. Four of the conservancy’s greatest attractions include the Lamberton Conservancy, Warner Castle & Estate Gardens, the Alling DeForest Sunken Garden, the Vietnam Veterans Memorial of Greater Rochester and the Frederick Douglass Memorial Plaza.

At the Lamberton Conservancy, you can find a multitude of plant species from tropical rain forests to desert environments. Circling back to the seasonal highlights of Highland Park, a section of Lamberton changes each season to showcase the beauty of New York’s seasons. At Warner Castle & Estate Gardens, you can tour a beautiful property, landscaped by Frederick Law Olmsted Sr. In 1930, the Alling DeForest Sunken Gardens were included in the Warner Castle & Estate Gardens.

The Vietnam Veterans Memorial of Greater Rochester, allows you to reflect on the war and the soldiers who fought in it. There are 280 bollards at the memorial that represent the soldiers who did not return from Vietnam.

At the Frederick Douglass Memorial Plaza, you can view a blue granite statue of Frederick Douglass that was created in 1899. After being moved, today, the statue stands in the memorial plaza alongside a sculpture of the North Star. 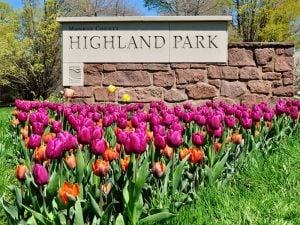 There are over 150 acres to explore at this conservatory, including a garden honoring…