The Central Park Rose Garden in Schenectady features over 4,000 rose bushes, a calming brook, and an elegant fountain. A great place for events & photos.

The Central Park Rose Garden has been a Schenectady staple for over 50 years.

It was created by Charles Brown in 1959. Originally the land was occupied by a stone tennis court. It took Brown a year to transform the land to be suitable for the first 400 rose bushes.

In the 1970s, the garden was maintained by the city’s parks department and reached its peak according to the locals. During this time the rose garden had 7,500 bushes and was the first recipient of the American Rose Society’s award for Outstanding Public Garden. It was also granted to be one of the American Rose Society’s test gardens, which allowed them to showcase new rose breeds.

After that though, the garden saw a steady decline because citizens of Schenectady were moving out of the city and into the suburbs. When the mid-nineties rolled around, most people thought the garden would be removed because it had sat abandoned and started to become overgrown.

The locals stepped up and decided to save it. They formed the Rose Garden Restoration Committee dedicated to restoring and enhancing the garden.

Now, the Central Park Rose Garden has over 4,000 rose bushes with 300 different varieties, a fountain, a brook and a small pond.

The garden also allows people to host their weddings and other events on its grounds. Prices vary and forms must be filled out in order to do so.

Visitors can walk through the garden free of charge. Patrons can explore the numerous varieties of roses, look at the impressive structures or sit on benches and relax to the sounds of the brook and the scent of roses.

The park is open from dawn to dusk every day and operates during the Spring, Summer and Fall seasons.

“Truly the best of Schenectady! the garden is stunning, an oasis in the city- visitors are always friendly and it is a labor of love for the volunteers who care for and support the garden.”

Experience this unforgettable attraction via Amtrak to Schenectady Station in Schenectady – Don’t forget to use the New York By Rail 15% discount!

Where to Stay in Schenectady

Looking for a getaway opportunity? Spend the night and experience all Schenectady has to offer. Take a look at these great hotel options—some offering exclusive New York By Rail discounts! 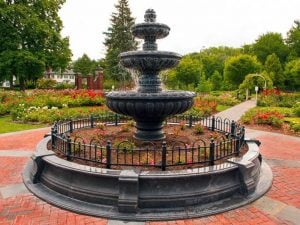 The Central Park Rose Garden in Schenectady features over 4,000 rose bushes, a calming…