Butterfield Stadium is home to the highly anticipated rivalry between the Cortland Red Dragons and the Ithaca Bombers, the clash of the rivals has been awarded the name “Cortaca,” selling out each game for the last 26 years. The Stadium is widely known for hosting the Cortaca Jug game between the two Division III college football teams in which thousands of fans join to celebrate and support their respective teams. 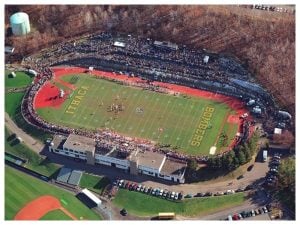