Experience one of New York City's most iconic venues on the Upper West Side!

Photo Courtesy of The Beacon Theatre

The Beacon Theatre, located on the Upper West Side between 74th and 75th Street, is one of the most popular and intimate theaters that the Big Apple has to offer. This 2,600 seat venue provides both a huge stage feel and an intimate feel, where the audience can enjoy a concert in a spacious theater. Come and see the many artistic performers at the Beacon Theatre on your next trip to New York City!

History of the Beacon Theatre

Built in 1929, the Beacon Theatre was designed by an architect named Walter W. Ahlschlager who wanted to make the venue have “art deco style.” Originally, the venue was used for showing silent films but was eventually used for the first sound movies in the city.

The Beacon was a movie theater up until the 1970s when it was turned into a concert venue. Popular artists that first played there include The Rolling Stones, The Grateful Dead, the Allman Brothers Band and many more throughout its illustrious history.

Over the years, in addition to movies and concerts, the Beacon has hosted special events such as the Tony Awards, particularly for the 70th anniversary of the awards. With its close-knit setting and great acoustics, the Beacon Theatre is a must for seeing a concert or event.

I went to see some friends of mine perform at this venue earlier this year. You just can’t match this old style and flair like the Beacon. So much history and authenticity based in nostalgia at this location. Staff was very kind in helping find our seats. The event was sold out so patrons were hungry to get to the seats. Old style and old TRUE customer service.

Take Amtrak to the Beacon Theatre 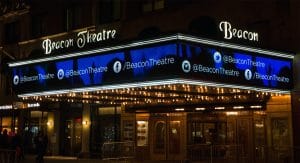 Experience one of New York City's most iconic venues on the Upper West Side!