The Munson Williams Proctor Arts Institute in Utica is home to numerous pieces of fine art.

Founded in 1919, the building was constructed in a Victorian style and serves as a place of education and world-renowned artwork.

The institute is named after three different generations of the Munson family because they were prolific art collectors in the late 19th and early 20th century. The museum formally opened in 1936 in the family’s home.

A few years after opening, the institute was granted to be eligible as a place for higher education. Their School of Art opened in 1941 and has since excels and is educating people of all ages. In 2000 the Pratt College of Art and Design had its first class attend through a partnership with the Munson Williams Proctor Institute. Students who attend the program can study either the museum itself or performing arts.

The performing arts side of the institute features a library full of records, lecture space and a screening room for the motion picture programs.

Some of the artwork that is featured inside the walls of the Institute are done by some of the most high-profile artists in history. Names like Georgia O’Keefe, Pablo Picasso, Salvador Dali and Jackson Pollock can all be seen on display next to their pieces. Their work is scattered among the eighteen collections that can be found in the museum.

The Institute offers workshops to the community for people of all ages. They constantly have new programs that they put on for members of the museum and local art fans. They also put out a monthly bulletin regarding news about the museum and events that will be occurring over the course of the entire month.

There is no entry fee to get into The Munson Williams Proctor Arts Institute, but there are some things inside that guests might have to pay for such as performing arts season events. Memberships are also available to those who want them, starting at $25. The Institute is open from 10 a.m. to 5 p.m. and is closed on Mondays.

Chicken Wire Empire
Saturday, February 4, 7:30 pm
Chicken Wire Empire mixes genres with half of the group rooted in bluegrass and the other half steeped in jamband music. The Wisconsin group is one of the most in-demand “jamgrass” bands.
$33 Members; $38 General Public; $15 Students

10,000 Maniacs
Saturday, March 11, 7:30 pm
The earthy and soulful rock of 10,000 Maniacs has been a cornerstone of the alternative music scene for more than 40 years. The group’s live shows feature four of the six original members.
$45 Members; $50 General Public; $20 Students

“Here is another special Utica place! You would not think that the Mohawk valley as such a prestigious art museum, but here it is.”

Experience this unforgettable attraction via Amtrak to Utica Union Station in Central New York—Don’t forget to use the See New York & Save 15% discount! 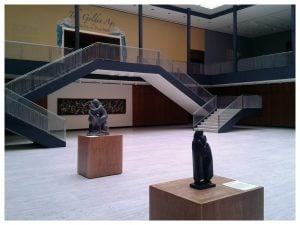