Artifacts from the Battle of Plattsburgh which stopped the British advance from the north. Materials, exhibits and artwork from the War of 1812.

The War of 1812 Museum is run by the Battle of Plattsburgh Association as an effort to preserve the memories of soldiers lost and battles fought. The site commemorates the engagement where American General Alexander Macomb stopped the British advancement into the northern territory. This occurred on September 11, 1814, and was a great victory for the revolutionary forces.

The on-site museum houses many pieces of art relating to and depictions of the battle in Plattsburgh and the War of 1812 itself. The museum also hosts several rotating exhibits, including the “Forgotten Artifacts of the Battle of Plattsburgh,” which features musket pieces, strips of metal, and ammunitions dredged from nearby Lake Champlain. The site is also home to a five-by-fifteen foot diorama that recreates how the battlefield looked during the conflict.

A perfect destination for history lovers wanting to experience the battle firsthand, or families searching for a day of educational fun. Although currently closed, there is something for everyone at the War of 1812 Museum.

“If you want to learn about the area’s involvement in the War of 1812, this is the place to go.”

Take Amtrak to the One World Observatory

Experience this unforgettable attraction via Amtrak to Plattsburgh Station in —Don’t forget to use the New York By Rail 15% discount! 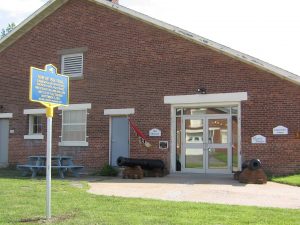