Go boldly where no man has gone before, to the Star Trek Original Series Set in Ticonderoga. When the series was cancelled in 1969, most of the set was destroyed or scattered across the country. It remained this way until superfan and museum director, James Cawley, began his collection. Over the course of a fourteen-year building period, Cawley collected as many of the set pieces he could. Through this journey he constructed an almost picture-perfect replica of the original set as it would have looked fifty years before.

The set, reconstructed using original blueprints and thousands of photos, completely replicates the series from the years of 1966 to 1969. The exhibit includes many sets from the famous Starship Enterprise. From the engineering room and sickbay, to the transporter room and iconic bridge.

More than just an archive of the show, the museum also hosts events and panels with fans and cast members. Events are often held with former cast member and Star Trek icon, William Shatner. These events are held both on site and on Lake George dinner cruises.

Tours last about an hour, with tickets available for purchase online or at the door. Pricing depends on age or group size, with children under fourteen entering for free.

Actor, William Shatner will be celebrating his 90th birthday this year in 2021. For his birthday celebration, Shatner has chosen to visit Ticonderoga’s Star Trek Original Series Set Tour. Shatner played Captain James T. Kirk for all three seasons of Star Trek. Although his birthday is in March, the actor’s birthday will be hosted by the business from July 23rd to 24th. This two-day ticket event will have a few tiered ticket packages, including VIP, all-inclusive package, featuring a 90th birthday dinner celebration with Shatner, a tour of the set with the actor, a “bridge chat,” photo session and autograph.

“If you are a Star Trek original series fan, run don’t walk (or better yet beam yourself there!) to visit the set.”

Take Amtrak to the One World Observatory

Experience the original Star Trek Set via Amtrak to Ticonderoga Station—Don’t forget to use the See New York and Save 15% discount!

From Ticonderoga, the Star Trek Original Series Set is only 1.8 miles away. 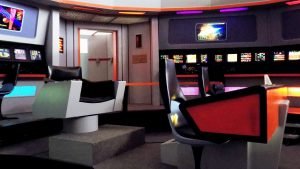