A valuable community resource in Rutland, Vermont, The Paramount Theatre has assumed the role as an arts, culture, and educational leader since the early part of the 20th century.

Built in 1912 and 1913 by George T. Chaffee, the Paramount Theatre was one of the most artistically designed theaters in America. The “City Beautiful” movement of the time inspired the exterior architecture’s classical style. The interior of the theatre reflected the Victorian opera house style. The theatre opened on January 16, 1914 under the name The Playhouse Theatre and provided seating for 1,000 patrons. In 1931, the Playhouse Theatre became the Paramount Theatre when it embraced the movie phenomenon. Whether they were frivolous or sentimental, all 1930s movies were screened at the Paramount. However, in 1975, the theatre closed its doors because of the film industry decline. For a decade, the theatre was not used until The Paramount Center Inc. reopened the theater and began restoring it to its authentic beauty. Today, the theater is open to all forms of the arts.

This summer, the Paramount Theatre presents the Same Sun of Vermont 2021 Movie Series. Great throwback movies will be shown at two drive-in locations, The Jack McKernon Drive-In at Brandon’s Estabrook Park and The Norma Patterson Drive-In at The Vermont State Fairgrounds. The movies start at 8:45, and the cost is $25 per car.

The Paramount Theatre also presents the Paramount Outside the Box Under the Stars at the Meadow at the Vermont State Fairgrounds this summer. See below for a list of events. Prices and showtimes vary, click here for more information.

July 17 Badfish: A Tribute To Sublime W/S/G Roots of Creation

July 23 Steve Earle and the Dukes

Aug 7 ABBA The Concert: A Tribute to ABBA

“Charming, remodeled venue that takes you back in the day. The acoustics are wonderful for music based shows and its intimate size makes no seat a bad seat. We love the Paramount!”

Take Amtrak to the Paramount Theatre

Experience the Paramount Theatre via Amtrak to Rutland Station in Vermont —Don’t forget to use Amtrak’s See New York and Save 15% discount!

Rent a car with Enterprise! Pick up your reserved NYTRAIN Enterprise Rent-a-Car right at the Rutland Station. Click here to reserve your car or call the Rutland office today at: 802-773-0855. 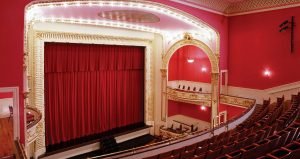 A valuable community resource in Rutland, Vermont, The Paramount Theatre has assumed the…