The Norman Rockwell Museum of Vermont is a great place to spend the day looking at American art.

Rockwell, most widely known for his work on The Saturday Evening Post, Life and Literary Digest, was an artist who painted and illustrated scenes of the American people.

These works of art had been widely distributed to the public and helped raise 130 million dollars for the war efforts during World War II.

The museum, located in Rutland, Vermont, was established in 1976 and commemorates the fourteen years that Rockwell and his family lived in the area. It features pieces that are widely known to the public and a few rare pieces as well. In total, the exhibit holds over 2,500 pieces of art, ranging from magazine covers, calendar artwork, advertisements and book illustrations.

Rockwell’s work is displayed in chronological order. Visitors are able to see Rockwell’s life unfold in front of them, from early work done in his teenage years with Boy’s Life all the way to his more famous and widely recognizable pieces.

“This is a great little place to stop and check out some of Rockwell’s greatest works.”

Take Amtrak to the Norman Rockwell Museum of Vermont

Experience this unforgettable attraction via Amtrak to Rutland Station in Vermont—Don’t forget to use the New York By Rail 15% discount! 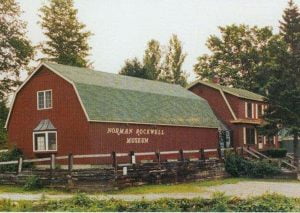