Located on the easternmost point of Long Island, Montauk Point was the first lighthouse built in the state of New York and operates as a museum today.

The lighthouse is the fourth oldest active lighthouse in the United States and is listed on the National Register of Historic Places. In 2012, Montauk Point Lighthouse was designated a National Historic Landmark.

Today, the lighthouse is a privately run museum.

The museum, which is located in the 1860 Keepers’ house, displays an assortment of many historical documents, and photographs.

The Museum Parlor features a display case containing two historical documents. One is signed by Secretary of State Thomas Jefferson and is the Congressional authorization, approved by President George Washington in 1792, to construct a lighthouse at Montauk Point. The second, signed by President George Washington in 1796, authorized the federal purchase of land from the Montauk Proprietors for the purpose of building a lighthouse at Montauk Point.

The Gilmartin Galleries is home to an exhibit to whaling industry artifacts from the 19th century.

Monday through Friday there is free parking for Senior Citizens (62 and older) holding a New York State Driver’s License.

“Breathtaking views of the Atlantic. It is such an iconic landmark and I believe one of the top lighthouses in America. A must see when in the area.”

Or get picked up from Penn Station and taken to your reserved NYTRAIN Enterprise Rent-a-Car. Click here to reserve your car or call the Chelsea office today at: 212-647-9777. 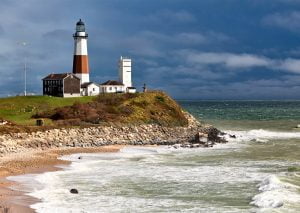 Located on the easternmost point of Long Island, Montauk Point was the first lighthouse…