Explore the Town of Lewiston for a deep-rooted history with the French and British, and beautiful views of the Niagara River and Lake Ontario.

Visit the Town of Lewiston and experience its deep, fascinating history and witness the birthplace of Niagara Falls. It is referred to as the birthplace because the falls began developing 12,000 years ago at the Niagara Gorge, which begins in Lewiston. Niagara Falls continues to expand, and has already spread through 7 miles of solid rock. Lewiston also hosted the first battle in the War of 1812 between the United States and Canada (which was occupied by Britain at the time).

Lewiston has a complete account of their history on their website, which reviews its founding and significant events throughout its existence. The town was also the last section of the Underground Railroad, and assisted individuals seeking freedom escape to Canada. The town currently maintains a webcam stream on the Freedom Crossing Monument.

Experience the town of Lewiston via Amtrak to Niagara Falls Station in Niagara Falls, NY—Don’t forget to use Amtrak’s See New York and Save 15% discount! 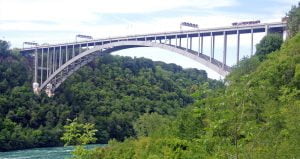 Explore the Town of Lewiston for a deep-rooted history with the French and British, and…