Take a dive into colonial American history by visiting the Johnson Hall Historic Site, the once home to Sir William Johnson.

Johnson Hall was the 1763 Georgian-style estate of Sir William Johnson, Molly Brant––a Mohawk Indian––and their eight children. Johnson’s fame knows no bounds. Within the colonial Mohawk Valley, he was the largest single landowner and most influential individual. In fact, his successful manipulation of the Six Nations of the Iroquois greatly influenced England’s defeat of France over control of North America.

Originally, Johnson Hall was the centerpiece of the 700-acre estate, complete with gardens, a mill, blacksmith shop, Indian store, barns, slave and servant housing and other buildings. Until 1906, Johnson Hall remained a private residence. It was then that the State of New York acquired the home and opened it to the public as a State Historic Site.

Today, Johnson Hall continues to attract visitors and explain the Johnson family history through guided tours of the period rooms and of the grounds.

“Fascinating and wonderful! The tour guide gave one of the best tours I’ve ever taken. The home of Sir William is well worth a visit.”

Experience this site’s rich history via Amtrak to Amsterdam Station in Central New York—Don’t forget to use the Amtrak See New York and Save 15% discount!

Get picked up from Amsterdam Station and taken to your reserved NYTRAIN Enterprise Rent-a-Car. Click here to reserve your car or call the Amsterdam office today at: 518-843-8535. 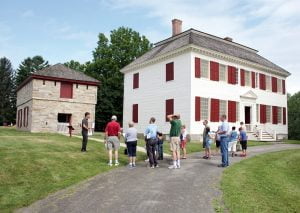 Take a dive into colonial American history by visiting the Johnson Hall Historic Site, the…