One of three ice surfaces at the Olympic Cente in Lake Placid, NY and the site of the 1980 Winter Olympics ice hockey tournament that saw the United States' 4–3 victory over the Soviet Union for the gold medal.

One of four ice surfaces at the Olympic Center, Herb Brooks Arena is a 7,700-seat arena in Lake Placid, NY. This rink, as well as the USA Rink, was built for the 1980 Winter Olympics and host to the 1980 Winter Olympics ice hockey tournament that saw the United States’ 4–3 gold medal victory over the Soviet Union. In 2005, to commemorate the 25th anniversary of the American victory, the arena was named after the late Herb Brooks, who coached the “Miracle on Ice” United States team during the 1980 Olympics.

But the glory hasn’t all passed. Every year the arena hosts national and international figure skating competitions, USA Hockey events, Stars on Ice, ECAC Hockey Championships, and other special events. During the summer months, Herb Brooks Arena hosts Saturday Night Ice Shows. Walk through the Arena during a tournament and hear cheers, just as the crowd’s chants coaxed a miracle out of the US team years ago.

Seasonal Activites at the Olympic Center

During the summer, the Olympic Center is busy hosting Lake Placid Skating—one of the longest running summer figure skating programs in the world—as well as a number of hockey tournaments. On Fridays, figure skaters work on their programs in front of an audience during Freaky Fridays, and on Saturday Nights, the 1932 Rink Jack Shea Arena hosts Saturday Night Ice Shows, a tradition of Lake Placid skating.

In the winter, explore the three historic arenas and walk the hallowed hallways of the 1980 Herb Brooks Arena and the 1932 rink. Aside from public skating, figure skating and hockey, the Olympic Center offers guided tours, a virtual reality experience and some of the best views in town.

Other Arenas at the Olympic Center in Lake Placid, NY

The Olympic Center has a total of four ice surfaces—three indoor, one outdoor—for Lake Placid public skating and athlete training, hosting one of the longest-running summer figure skating programs in the world. Tours are available for the 1980 Herb Brooks Arena, 1932 Rink and the Conference Center at Lake Placid. They also accommodate conventions, large conferences, meetings and social functions in the newly remodeled Lake Placid Conference Center, located adjacent to the Olympic Center in the heart of Lake Placid.

“Excellent place to visit. Tremendous history, and great aura and atmosphere. It’s also a great venue to seek figure skating shows or hockey games as there is no bad seat in the place.”

Take Amtrak from your local station to Westport Station. Use the New York By Rail 15% discount! From Westport Station, take the Amtrak shuttle to your base camp in the village of Lake Placid.

If Plattsburgh Station is a more convenient stop, use the shuttle service to the Olympic village. Or, make your own time and get picked up from Plattsburgh Station and taken to your reserved #NYTRAIN Enterprise Rent-a-Car. Click here to reserve your car or call the Plattsburgh office today at: 518-566-0190. 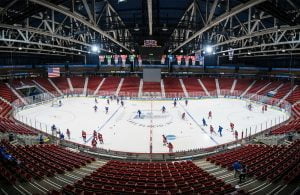 One of three ice surfaces at the Olympic Cente in Lake Placid, NY and the site of the 1980…