Fort Niagara State Park, complete with a scenic park, boating and pool areas, reopens this fall after a $2.7 million overhaul.

Fort Niagara State Park, complete with vast grounds, boating, hiking, and many more activities reopens after a $2.7 million overhaul. The park grounds contain the historic site of Old Fort Niagara, offering activities for the history buff in every family in addition to outdoor recreation.

Based on the mouth of the majestic Niagara River at Lake Ontario, the Fort Niagara State Park offers incredible views. Sunsets over one of the Great Lakes and even the Toronto skyline can be seen from the park’s “Sun Lawn”.

Visitors to the Fort Niagara State Park during summer months can cool off in an olympic-sized swimming pool, a wading pool, bath houses, and waterslides. The park’s shoreline boat launches give visitors easy access to both the river and the lake. Fishing enthusiasts spend hours on the Niagara bodies of water accessible from the park.

Picnic tables and fast-food snack bars allow for lakeside eating. Chairs and blankets are scattered across Fort Niagara State Park’s pebble beach for scenic relaxation. There are several trails for hiking, including the Lake Shore Trail and the Range Trail. Fields throughout the park are home to soccer, rugby, and frisbee tournaments.

Muskets blaze and cannons roar at the mighty Old Fort Niagara that has stood for over 300 years. Three flags adorn the top of the museum to show each group that once held power there. The fort served as a stronghold for the French, British, and American armies during the French and Indian War, the American Revolution, the War of 1812, and several other armed conflicts. Since then, it has been a training facility, peacekeeping border post, and soldier barracks during the Civil War and both World Wars. Artifacts, reenactments, and carefully-constructed exhibits tell the story of the fort’s history and the lifestyle of the people who made that history. 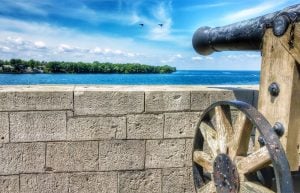