Doubleday Field in Cooperstown, NY is referred to as the Home of Baseball.

It is more than a baseball field though. It is a place to gather together and is located in a town rich with baseball history and is located a mile away from the Baseball Hall of Fame.

The field is named after Abner Doubleday, who was a general in the army during the Civil War. Doubleday is also rumored to be the founder of the game of baseball. Since its foundation, the field has seen Major League Baseball games, All Star games and college games. If there is a game to be played at Doubleday field, there is also a crowd of locals and tourists to follow close behind and fill the stands.

During the 1910s, money was raised to build the field exactly where it is. It had to first be purchased from the Phinney Family. It wasn’t until almost ten years later when the field space was purchased by Cooperstown’s Chamber of Commerce from Elihu Phinney, and the groundwork was laid.

Countless donations came in to build a grandstand and other structures during the 1920s. As the field started to come more and more into fruition, Cooperstown started to become a major attraction. The 1950s saw Doubleday Field get some upgrades including more seats and a renovation of the original grandstand. Bleachers were donated from Fenway Park by Thomas Yawkey, the owner of the Boston Red Sox at the time.

The electric scoreboard went up in the late 1980s, and since then, not much has changed to Doubleday Field. The space is used for baseball games but also community events like festivals, carnivals and car shows.

The field is able to be rented out to play on from mid-April to October. They offer time slots in the morning, afternoon or evening.

“The birthplace of baseball! It is a must stop. You get chills thinking of the greats that have stepped foot on that diamond.”

Experience this unforgettable attraction via Amtrak to Utica Station in Utica—Don’t forget to use the New York By Rail 15% discount!

Where to Stay in Central New York

Looking for a getaway opportunity? Spend the night and experience all Central New York has to offer. Take a look at these great hotel options—some offering exclusive New York By Rail discounts! 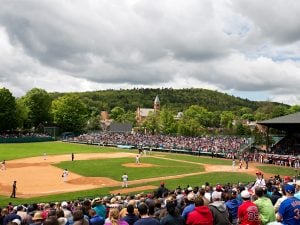