View preserved ruins of the colonial wars between the British and French and visit the museum of original artifacts recovered from the site by archaeologists.

The New York State Parks, Recreation, and Historic Preservation maintain the Crown Point State Historic Site for all the enjoy! Crown Point State Historic Site showcases the preserved ruins of  two fortifications from the colonial wars between the British and French. The site also features a museum, which includes a multimedia orientation program, large scale models, and an exhibit of original artifacts recovered from the site by archaeologists.

The French built one of the two fortifications, named Fort St. Frederic, at the site between 1734 and 1737. It was used as a base for raids on British settlements. As a result, the British began expeditions to take control of Crown Point, and in 1759, they were successful. The British immediately began construction of the second fortification, which they called “His Majesty’s Fort of Crown Point.”

Admission for adults is $4, $3 for seniors and groups, and free for children 12 years old and under. The picnic shelter is $50/day.

Experience the Crown Point State Historic Site via Amtrak to Port Henry Station in Adirondacks —Don’t forget to use Amtrak’s See New York and Save 15% discount!

Rent a car with Enterprise! Pick up your reserved NYTRAIN Enterprise Rent-a-Car right at the Port Henry Station. Click here to reserve your car or call the Queensbury office today at: 518-745-5020. 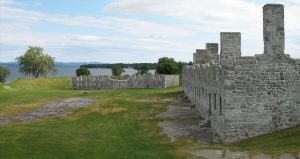