The Castellani Art Museum showcases 300 years of artists' depictions of Niagara Falls, within a glass complex overlooking the falls themselves. Free admission.

The Castellani Art Museum is made up of over 5,500 pieces of contemporary artwork. The museum makes sure to recognize the diversity of the area and try to best express that through the reflections of each exhibit in the museum. Learn how the museum can have a relationship with those observing it and what we can take away meaning from all of the art on display.

History of the Castellani Art Museum

Discovered by Mr. and Mrs. Armand J. Castellani in the 1960s, the Castellani Art Museum is located at Niagara University. It wasn’t until the late 1970s when Mr. Castellani showed some interest in art by supporting the building of the Buscaglia-Castellani Art Gallery as a tribute to Thomas Buscaglia, who had recently passed away. At the time, Mr. Castellani had approximately 300 pieces of artwork. By the late 1980s, their collection had grown to around 3,000 pieces of artwork. The museum opened in 1990, and has been around to present Castellani’s artwork for all of its visitors.

Exhibits at the Castellani Art Museum

With tons of exhibits on display, this museum is broken up into three different categories of exhibits. There is a folk arts, a contemporary art, and a traveling exhibit. Check out the traveling exhibit to see numerous panoramas of famous baseball parks. Captured by Jim Dow in the early 1980s, “Fields of Dreams: North American Baseball Stadiums” is made up of pictures captured to understand the disappearing uniqueness of all the ballparks in the sport.

Over in the contemporary art exhibits, you can observe the “Of Their Time: Hudson River School to Postwar Modernism”. This exhibit pays attention to the artwork created during the 19th and 20th centuries that focuses on the drastic changes that were taking place in America. Between the expanding borders of America and the Industrial Revolution taking place, there were many concerns towards the limits of these changes. These are heavily expressed in the artwork.

“A very beautiful museum that is an extension of the Castellani Collection of art/artifacts.”

Enjoy a day filled with art and culture from New York via Amtrak to Niagara Falls Station in Niagara Falls—Don’t forget to use the New York By Rail 15% discount! 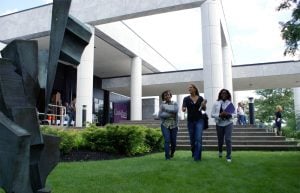