Tour and get your fill of Belgian-style brews at the home of HBO's Game of Thrones-inspired beer.

Brewing Belgian-style ales beginning in 1997, Brewery Ommegang created its first in a series of brews based the HBO TV series Game of Thrones in 2013.

Ommegang brews eight ales year-round, as well as an extensive range of seasonal and specialty ales. The beers have won a national following by connoisseurs of fine beer and are distributed in 43 states and internationally. The brewery is located on a 136-acre farmstead in Cooperstown and offers free daily tours and inexpensive tastings as well as a well-stocked brewery store and an annual calendar of public events!

Each summer, the brewery hosts a large beer-tasting event, known as Belgium Comes to Cooperstown. The event, which occurs on a Saturday in July or August, includes seven hours of unlimited sampling of over 200 Belgian and Belgian-style beers followed by food, live music, and a bonfire.

“We loved the brewery tasting. You can’t beat Ommegang beer. We got to try so many amazing beers during the tasting and the guide was great!”

Experience Brewery Ommegang via Amtrak to Utica Station in Utica. Don’t forget to use Amtrak’s See New York and Save 15% discount! 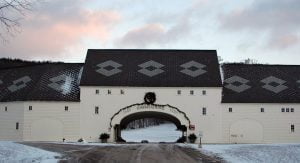