The Herschell Carrousel Factory Museum has vintage carousels on display and 1950s-era rides with cars, fire trucks and helicopters.

Learn all about the beginnings of amusement parks and the history behind it at Herschell Carrousel Factory Museum in North Tonawanda through tours and plenty of exhibits across the grounds. Allan Herschell, founder of the Allan Herschell Company in 1915, developed the company into the best makers of carousels during the time by creating portable machines that were most convenient to traveling carnival operators. They were able to create over 3,000 hand carved carousels and rise to the top of the carousel industry.

What to Do at the Herschell Carrousel Factory Museum

Ride the carousels themselves, watch videos on their creation, or take home a souvenir from the museum’s gift shop. Marvel at the intricate aesthetics and designs of the hand-carved carousels and the horses themselves. See the beautiful designs and architecture of these carousels that have stood for over 100 years.

Check out the Lockman Collection, where visitors can relive the sixty years of evolution in the style of craft with the carousel animals since the late 19th century. The collection is also made up of more unusual animals than you may usually see on a modern carousel. It includes dogs, boars, roosters, and ostriches along with the horses. Take a tour and be amazed at the level of detail these carvings have!

You can even take a look at the Artizan Style “D” Band Organ that was created right in North Tonawanda. The organ is looked at as a rare artifact due to it being the largest configuration built by Artizan. It also still plays the music it was originally built to play, while most organs have been converted to Wurlitzer style music rolls. The organ is inside of a trailer on the grounds, which allows them to bring it around and promote the museum by showing it off in various areas.

“The place is just wonderful. The history and tech is amazing. Kids loved the many rides. The people there put so much love in this place to maintain it. A good place to visit in between and to get away from more busy tourist attractions.”

Enjoy a ride on a carousel from New York via Amtrak to Niagara Falls Station in Niagara Falls—Don’t forget to use the New York By Rail 15% discount! 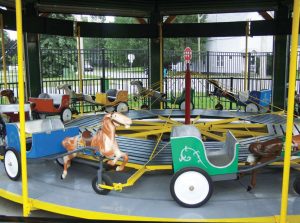