The original Pennsylvania Station may be long gone, but if you know where to look, you can still find ghosts of it in the current station. 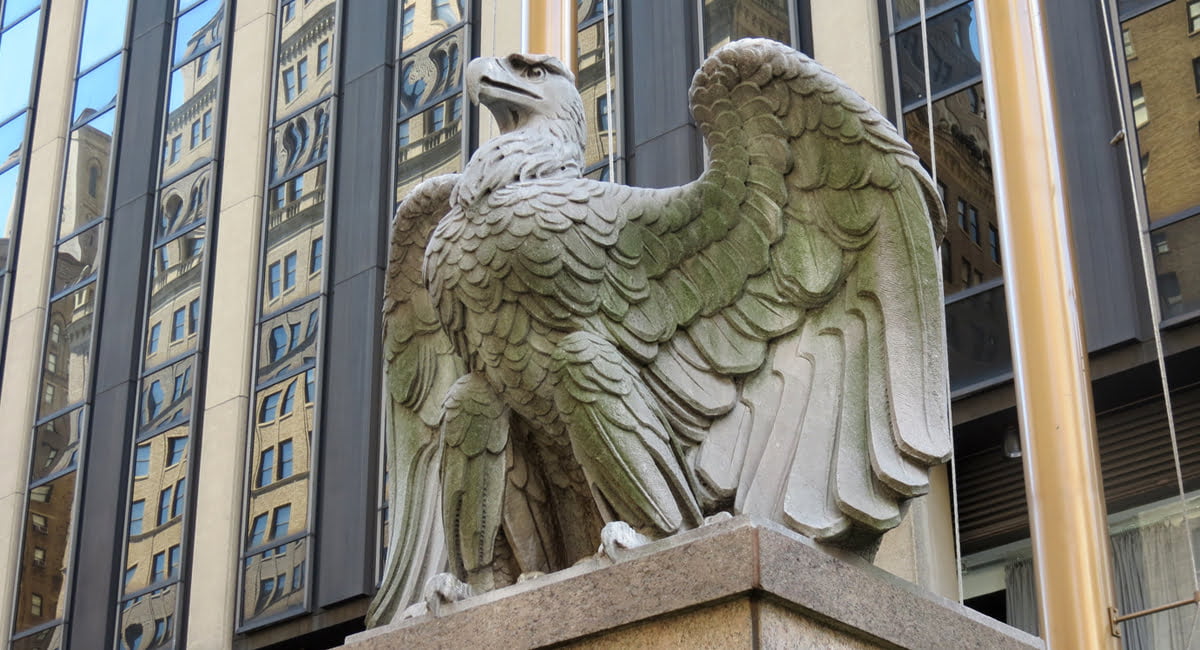 The original Penn Station, which opened in 1910, featured four identical groups of sculptured eagles and maidens flanking the clocks over the porticos of the four main entrances. They were the work of famed architectural sculptor and coin engraver, Adolph Alexander Weinman, who also designed the Mercury dime and the Walking Liberty half–dollar, coins circulated by the United States Mint during the first half of the 1900’s.

During the demolition of Penn Station during the 1960s, the eagles were saved and transferred to new homes across the nation. Two of them found their way back to the station, facing Seventh Avenue in front of the Two Penn Plaza skyscraper and flanking the entrance to Madison Square Garden.

The Ghost Series are five monumental bas-relief terra cotta murals by artist Andrew Leicester and installed on the Long Island Railroad (LIRR) Concourse on Penn Station’s lower level. Sponsored by the Metropolitan Transit Agency, they were installed in the 1990s to evoke memories of the former, demolished station. 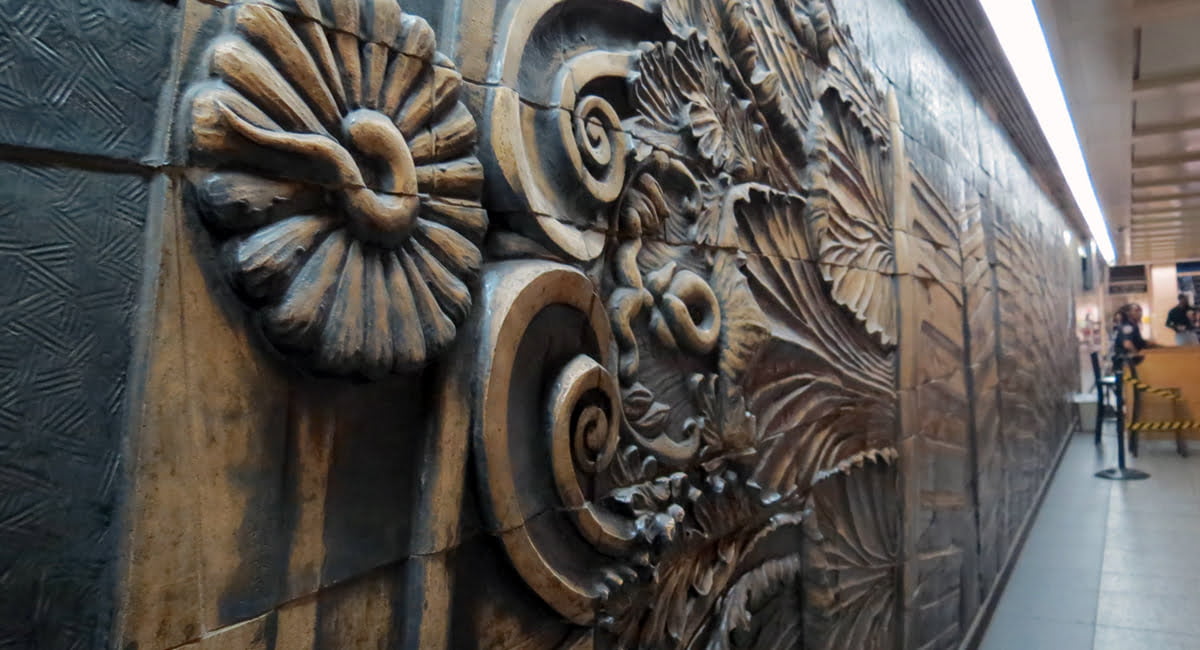 The first mural, “Day and Night”, depicts two allegorical maidens. It is located at the east end of the LIRR’s North Concourse. Along with the eagle sculptures, the maidens made up the sculptural group by Weinman that flanked the clocks over the old station’s entrances. During demolition of the old station, the maidens (along with most of the old station’s stonework) were dumped in the Jersey Meadowlands, a large wetland in New Jersey also known as the Hackensack Meadowlands after the primary river flowing through it. A photograph taken in 1966 by New York Times photographer Eddie Hausner of one of the stone women upside down in the Meadowlands became an iconic image of the loss of the former station.

Nearby, in the 34th Street passage at the east end of the LIRR’s North Concourse, is the mural, “Plinth”. A plinth is the base or platform upon which a column, pedestal, statue, monument or structure rests. Toppled over and broken up, the columns in the two murals on opposing sides of the passageway evoke the massive 70-foot classical Corinthian columns of the 1910 station’s vast main waiting room, which was larger than the main concourse in Grand Central Terminal. 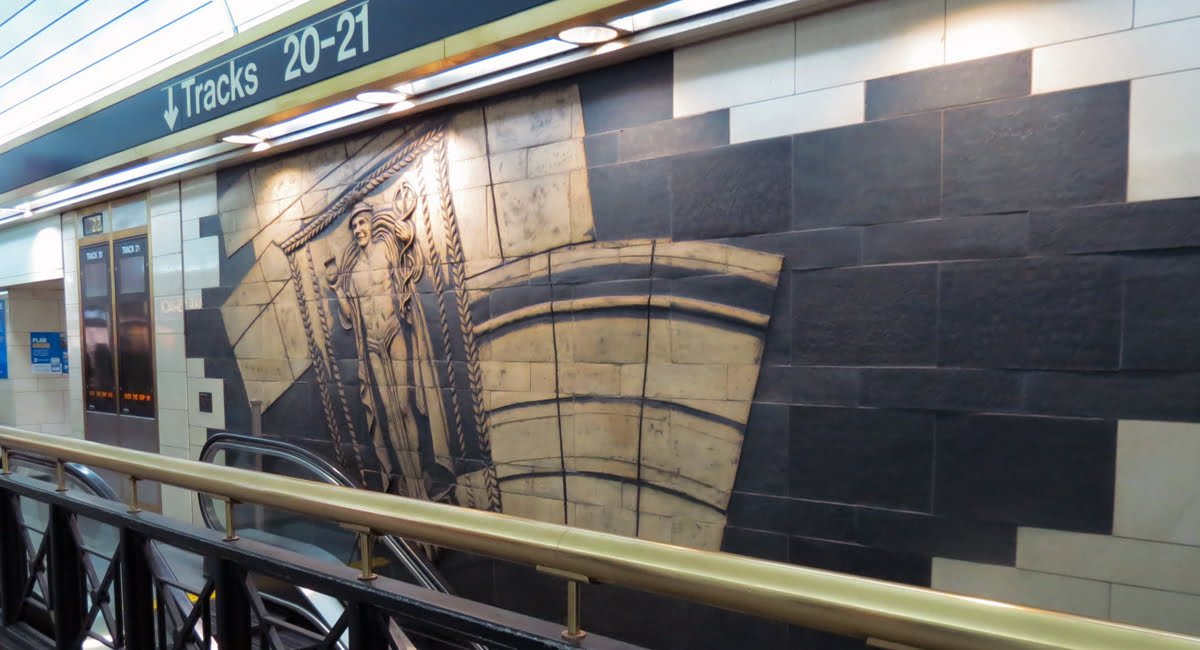 Other Leicester murals include a porcelain-on-steel rendering of the blueprints of the original station and a sculpture reproduction called “Mercury Man”, located over a staircase down to the platform for Tracks 20 and 21, midway down the LIRR’s North Concourse.

Below both the “Day and Night” and “Mercury Man” murals, and elsewhere in the station, are staircases with decorative brass and wrought iron railings. These are original from the 1910 station and have survived to the current day, along with a cast-iron partition at the entrance to the LIRR waiting room and the glass block ceilings that once allowed daylight to reach track level but are now dark. 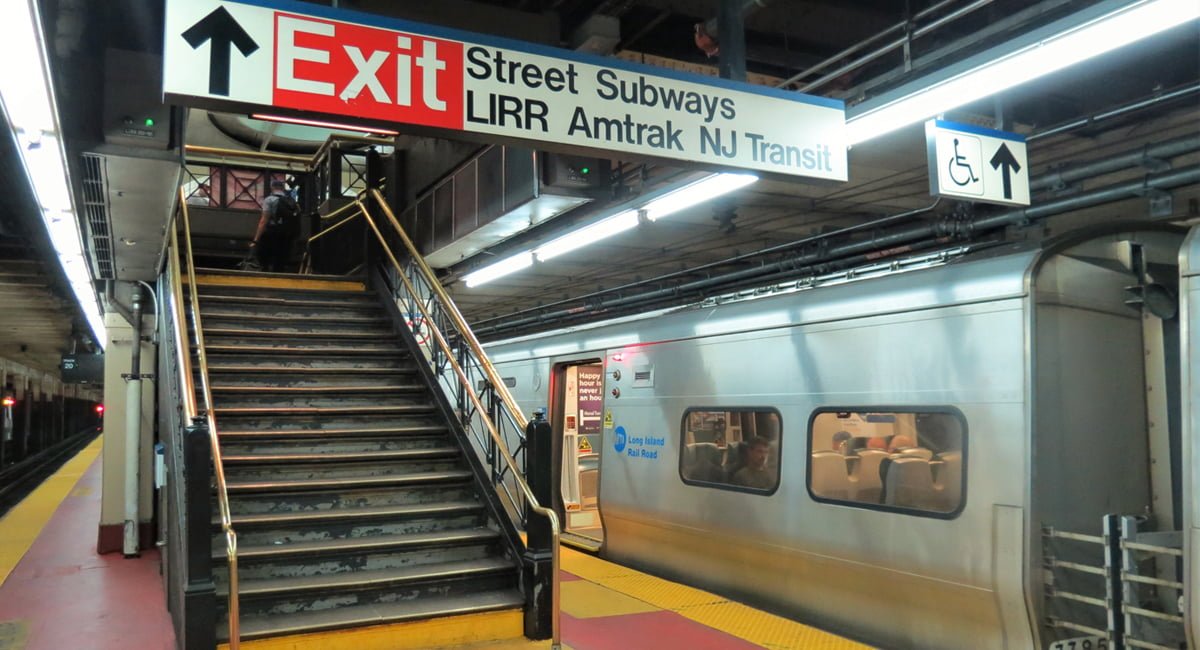 Such functional pre-demolition relics likely survived due to the need to keep the station open during the demolition and reconstruction, to cut costs and because they are located on the less prominent commuter–level of the station.

On the upper Amtrak level in Penn Station, the original stainless-steel “Mad Men” clocks are mounted on the ceiling. In Iconic images of the original 1910 station, you can see similar large-diameter, double-sided clocks hanging from the ceiling in the main waiting room and train concourses. The current clocks, though from the 1960s, are similar and worthy of preservation. They can be found on the east end of the Amtrak rotunda and in the passageway to the main station entrance on Seventh Avenue.