Shakespeare in the Park: Twelfth Night | New York By Rail

Become one of the five million people who have visited the Delacorte Theater for free performances, and see why Shakespeare in the Park has become a most beloved summer tradition. The Public Theater is dedicated to developing an American theater that is accessible and relevant to all people.

The annual free Shakespeare in the Park program returns with Twelfth Night and Othello. 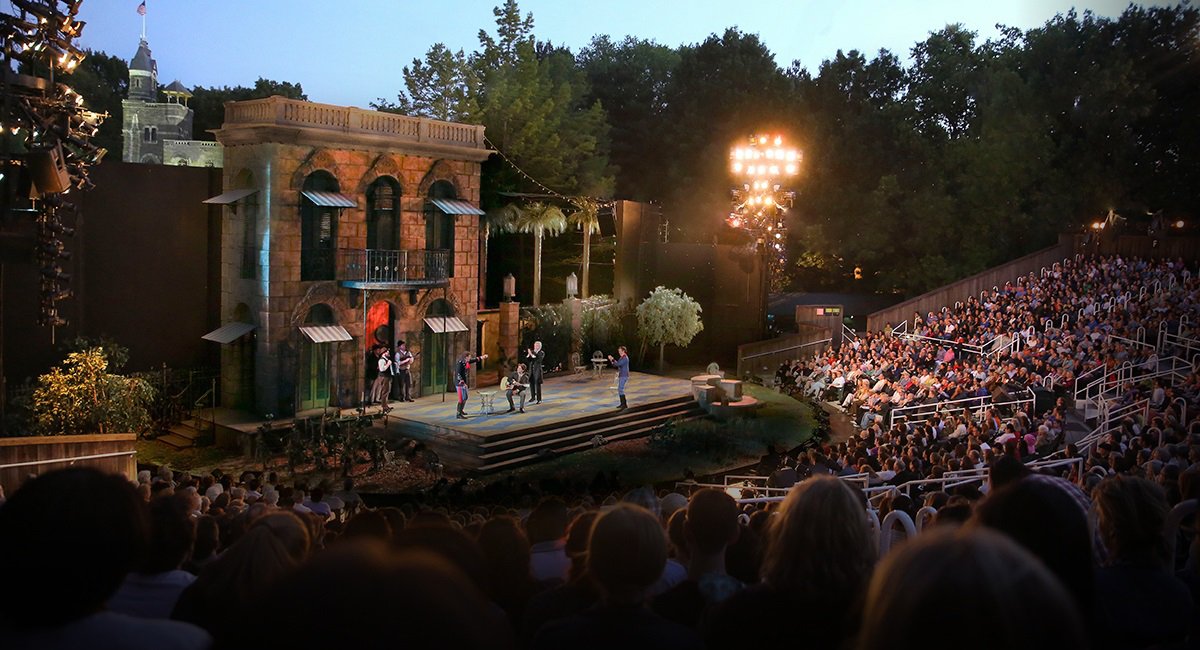 Shakespeare in the Park – Delacorte Theater | Photo from the Public Theater

Continuing the work of its visionary founder, Joseph Papp, The Public Theater is dedicated to developing an American theater that is accessible and relevant to all people. Creating theater for one of the largest and most diverse audience bases in New York City for nearly 60 years, today The Public engages audiences in a variety of venues – beginning with the free Shakespeare in the Park, returning with performances of Othello and Twelfth Night.

More than five million people have visited the Delacorte Theater for free performances, making it one of New York City’s most beloved summer traditions. At its landmark downtown home at Astor Place, housing five theaters and Joe’s Pub, The Public advocates for the theater as an essential cultural force through productions of new plays, musicals, and Shakespeare that lead and frame dialogue on some of the most important issues of our day. The Public’s programming also includes a range of artist and audience development initiatives including its Public Forum series, which brings together theater artists and professionals from a variety of disciplines for discussions that shed light on social issues explored in Public productions, and the Mobile Unit, which tours Shakespearean productions for underserved audiences throughout New York City’s five boroughs.

In celebration of five extraordinary years of Public Works, a Public Theater initiative that invites diverse communities across New York to create ambitious works of participatory theater, Free Shakespeare in the Park presents a re-imagining of Public Works’ 2016 musical adaptation of Twelfth Night for a full five-week run in Central Park. Professional artists and two rotating ensembles of community members from all five boroughs will perform together on the Delacorte stage in this enchanting comedy about Viola (Nikki M. James), a young heroine who washes up on the shores of Illyria, disguises herself as a man, is sent to court a countess, and falls in love with a Duke.

Featuring music and lyrics by critically-acclaimed songwriter Shaina Taub, this very special Twelfth Night is a unique partnership between two Public Theater programs that exemplify The Public’s commitment to radical inclusion. Oskar Eustis, The Public’s Artistic Director, and Kwame Kwei-Armah, incoming Artistic Director of London’s Young Vic, helm this unforgettable musical about love in all its many disguises.

Free Tickets for Shakespeare in the Park: Twelfth Night

Free tickets are distributed at 12 p.m. (noon) on each performance day via the free lines at the Delacorte Theater in Central Park. People waiting for free tickets must line up along the path designated by The Public Theater staff and The Parks Department. There are separate lines for Senior Accessibility for senior citizens (65+) who require accessible seating and ADA Accessibility for patrons with disabilities (attestation to the need for accessible seating will be required).

Each person (age 5+) may receive up to two (2) tickets, while supplies last. All those who wish to acquire tickets must have a Public Theater Patron ID. Follow this link to register or access your account before you arrive.

Performance days will vary from week to week, so be sure to check the performance calendar, and please remember that Central Park does not officially open until 6 a.m.

Seat locations are distributed randomly, not based on a person’s position in the line.

Take Amtrak to Shakespeare in the Park: Othello

Due to construction, Amtrak trains traveling through New York City will run from Grand Central Terminal until Saturday, May 26 and Monday, September 3. Experience these performances with the New York By Rail 15% discount!

From Grand Central Terminal, take the B Train from 42nd Street-Bryant Park uptown to 81st Street-Museum of Natural History. From there, Delacorte Theatre is a two-minute walk east into the park.