Celebrate the rich history of Bennington, VT and the town's participation in the American Revolution at the 2020 Battle Day Weekend on August 17th.

Celebrate the rich history of Bennington, VT and the town’s participation in the American Revolution at the 2021 Battle Day Weekend on August 16th. 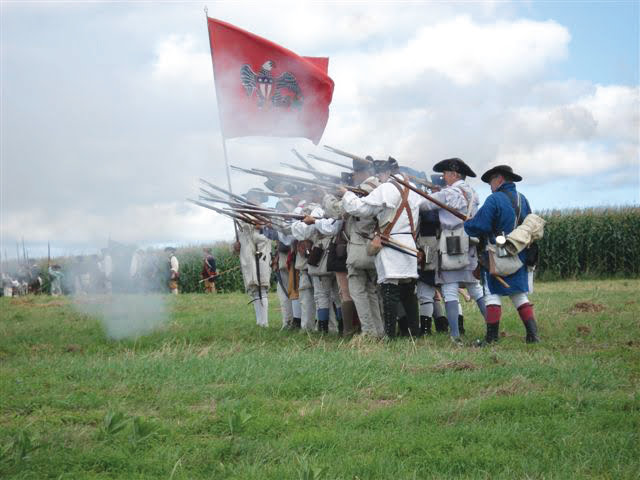 Celebrate the history of Bennington, Vermont this summer!

Please note: At this time, Amtrak is not running to Vermont. However, tune into the broadcast of the ceremony on Sunday, August 16, and plan a trip to see Bennington Battle for yourself at a later date.

Following the British’s recapture of Fort Ticonderoga during the American Revolution, American troops were sent to plunder military supplies from Bennington Vermont. On August 16th, 1777, the 800-strong raiding party pushed the British five miles North of Bennington. The battle was an overall success with a total of 30 American lives lost compared to Britain’s 207. Additionally, approximately 700 British troops were captured. This battle boosted American morale and contributed to the U.S. victory at the Battle of Saratoga and General Burgoyne’s defeat.

The celebration of the American victory in Bennington is open to the public and takes place on August 16, 2021. Enjoy a celebration like no other as you participate in a reverse parade in practicing social distancing! Feel the true spirit of community and town pride when you visit Bennington’s Battle Day Weekend this summer!

Participating in the Celebration

The Battle is now commemorated by a historical park and a 306-foot monument in the village of Old Bennington. Due to its significance in Vermont’s history, the Battle of Bennington has become a state holiday celebrated on August 16th.

Enjoy a take out chicken dinner at 4 p.m. until supplies run out. The Bennington Fire Department will deliver within a 5-mile radius. Tickets can be purchased in advance!

If public safety considerations permit, there will be high-altitude fireworks for people to see in their front or back yards.

The battle day ceremony begins at 11 a.m. where Governor Phil Scott is expected to be present to honor representatives of the 18 categories of workers that the Governor deemed “essential” in his executive order from March 24.

The ceremony will be broadcasted by CAT-TV.

The ceremony ends with the traditional firing of a cannon.

This year, the Battle Day Celebration Committee is putting on a parade where guests are welcome to join in with their car or truck to pass by sites such as the Hospital, the Fire Department and the Veterans Home. Only a limited number of parade vehicles can be accommodated. Those interested must apply online.

Visit Bennington via Amtrak to the Bennington Station—Don’t forget to use the Amtrak See New York and Save 15% discount! The station is 4.0 miles away from the battlefield, making it an easy and convenient option to get to the celebration.

From the Bennington Station, taken to your reserved NYTRAIN Enterprise Rent-a-Car. Click here to reserve your car or call the Bennington office today at 802-447-2203.