The 118th U.S. Open returns to New York State after nine years at Long Island’s notorious Shinnecock Hills Golf Club, hosting its fifth U.S. Open to date. Transporting even more spectators to the elite tournament, a temporary train platform reachable from Penn Station in New York City has been installed within walking distance to the event in Southampton, NY. 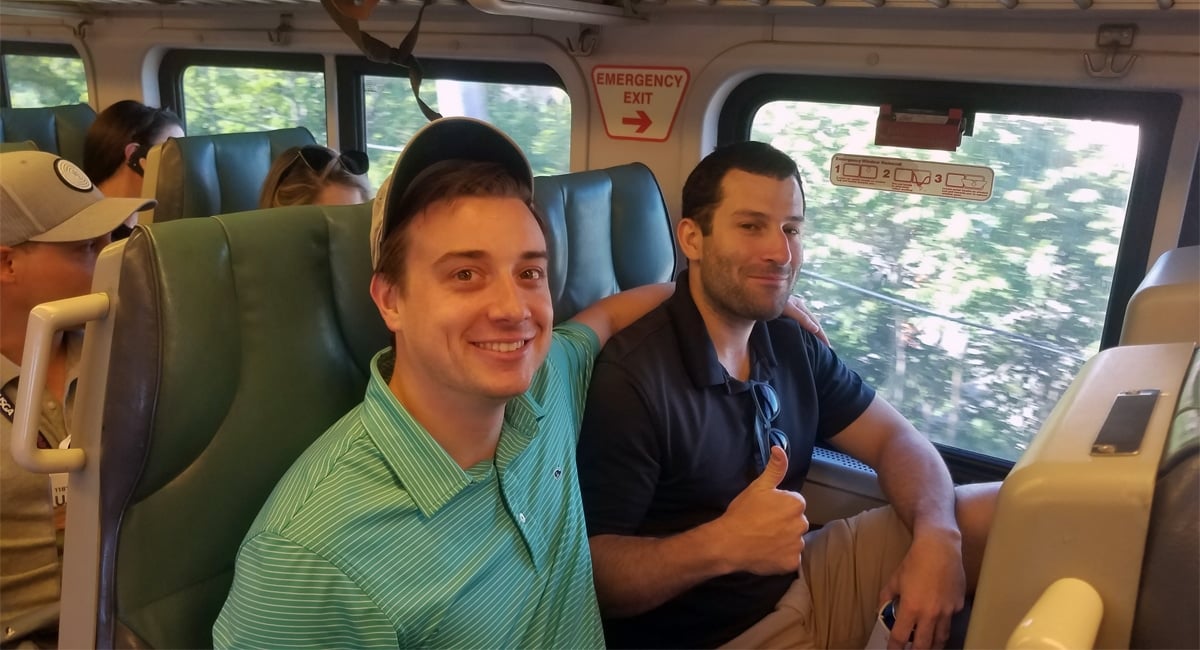 Friends aboard LIRR for the U.S. Open. | Photo by Raphael Beretta

My voyage to experience the silent anticipation of the crowds, the focus of top-tier athletes, the powerful ocean gusts, and hundreds of acres of emerald green began early in the morning. I arrived at the historic Penn Station in time to take an 8:23 train – the optimal time to depart for Shinnecock Hills. The cool and comfortable train carried us to the U.S. Open in a swift two hours and twenty minutes. The off-peak rate exclusive to this destination was an added bonus.

Each car of the loaded LIRR train was bursting with excitement. Spectators had come from far and wide to experience their heroes, including the return of Tiger Woods. Champagne flowed, jerky was munched, and chants were cheered. They came dressed the part, sporting Titleist, TaylorMade, and Calloway; an army of golfers had taken over the LIRR.

Aboard the train, golf fans representing locals and out-of-towners alike spoke about the convenience of the addition of the new platform in Shinnecock Hills. “This is for sure the fastest way to get out there, I have family out by Shinnecock, I was so glad they put this in,” said Manhattan native Alex.”

Nathan, an inhabitant of New Orleans, had taken an Amtrak train all the way to New York City to spend time with friends. “This was much better than driving, and the Uber I would have had to take from NYC was over $330 bucks.” Rachel from North Carolina was “really excited for the Open, I honestly thought I would have to just take the train to the closest station and figure it out from there. I had no idea this was here.”

Some were even utilizing the train as a business opportunity. Grayson from Atlanta was in New York to promote his beef jerky business “Bogey’s Beef.” He decided that taking the train to Shinnecock Hills and remaining there for the entire duration of the U.S. Open would be his best course of action. He was enjoying his time on the train, meeting people from several parts of the country and offering samplings of his southern snack.

As we departed the final stop before the tournament, the energy levels in each car had tripled. Every seat was taken, so newly-boarded eager fans took to sitting on the stairs and wandering the train, sharing their love of the sport and enthusiasm for the day to come. The word “Tiger” was heard repeatedly, first as a low murmur from calm conversations then growing louder due to raucous debate. “I am ready to relax, enjoy some beautiful weather, and watch some golf. What more can you say?” said Andrew from New Jersey as we approached the platform.

A sea of pastel and stripes flowed toward the gates of the U.S. Open once the train landed at its temporary home. The crowds chanted and cheered, happy to have arrived. We rested by the end of hole 13, watching the first round of golfers fight their way through one of the course’s trickiest greens.

A refreshing breeze and clear skies set the stage for some of the biggest names in golf, including Sergio Garcia, Dustin Johnson, Rory McElroy, and the crowd-favorite Tiger Woods.

The layout of the grounds was optimal to observe every aspect of the game up close; the “clink” from the tee off, strategy-setting second shots, sharpshooting chips, and high-pressure putts. The levels of stoic determination displayed by those attempting to survive one of the toughest courses the sport has to offer were a wonder to behold.

The ride back was quieter than traveling there. A full-day’s worth of golf had tired out even the most energetic fan. Many were taking advantage of the comfortable seats and napping.

The U.S. Open is unanimously considered by golfers and industry professionals alike to be the most difficult of the four majors, of which include the PGA Championship, the British Open Championship, and the Masters Tournament. After performing in the Masters Tournament and several other rounds of qualifiers, the most premier golfers in the world gather in a different U.S. locale every year to participate in the open national championship of golf. 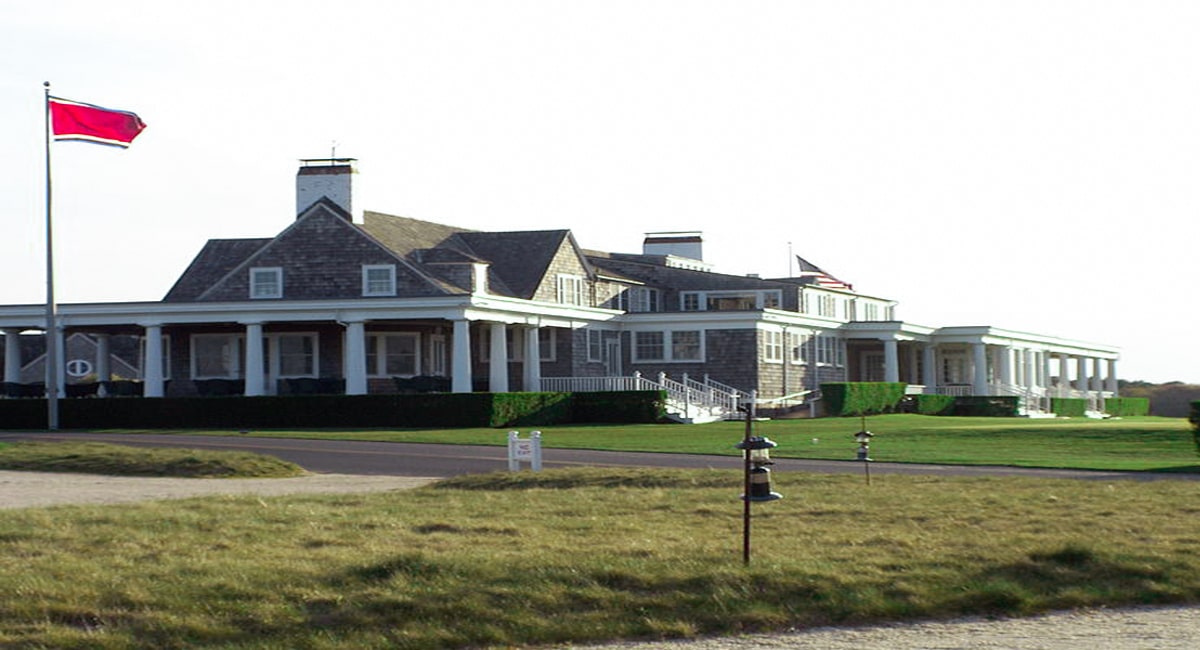 This championship is no breeze; year after year elite players repeatedly struggle in an event where par is a celebrated score. The endurance of true legends of the sport are put to the test in four long and often frustrating rounds of golf. High winds, fast greens, thick rough, and several other inhibiting characteristics make this event more grueling than any other major tournament.

The traditional links-style golf course of Shinnecock Hills claims to be the oldest formalized golf club in America, founded in 1891. The club holds prestige as one of the original five charter members of the United States Golf Association (USGA). At its inception Shinnecock Hills welcomed women inside the “men’s club” of golf, establishing a rich history of progressivism. Many professional golfers also believe it to be one of the most challenging in the states.

“It is a true test of golf that a U.S. Open deserves,” said Doc Nocella, a course rater for Golfweek magazine. The Atlantic Ocean’s strong winds roar through the Shinnecock Bay, which surrounds several parts of the course. Fairways become drastically narrower as they approach the green, punishing long drivers. Course and unpredictable rough challenge even the best chip-shot golfers.

“You don’t just have to hit good shots in the wind, but you have to be able to read the wind….but it’s such a hard one to judge. [Some holes] are just a bear,” said Jack Druga, a Shinnecock Hills professional, in an interview with ESPN. The leader of the tournament, currently Russell Henley, has a humble score of -3.

Though extremely demanding, the course at Shinnecock Hills is as scenic as they come. The open-field layout of the course makes it much similar to those of Scotland and England, where golf finds its roots. “It’s the St. Andrews of the United States,” said Dan Benson of Golfweek. The well-groomed fairways and dramatic slopes of the greens made it the most elegant course my eyes had ever laid eyes on.

What to Expect at the 118th U.S. Open at Shinnecock Hills

The stellar views and elite competition will draw die-hard golf fans and casual viewers alike. Nine thousand spectators are expected to travel to and from the tournament each day utilizing the newly-installed Shinnecock Hills Golf Club train platform. 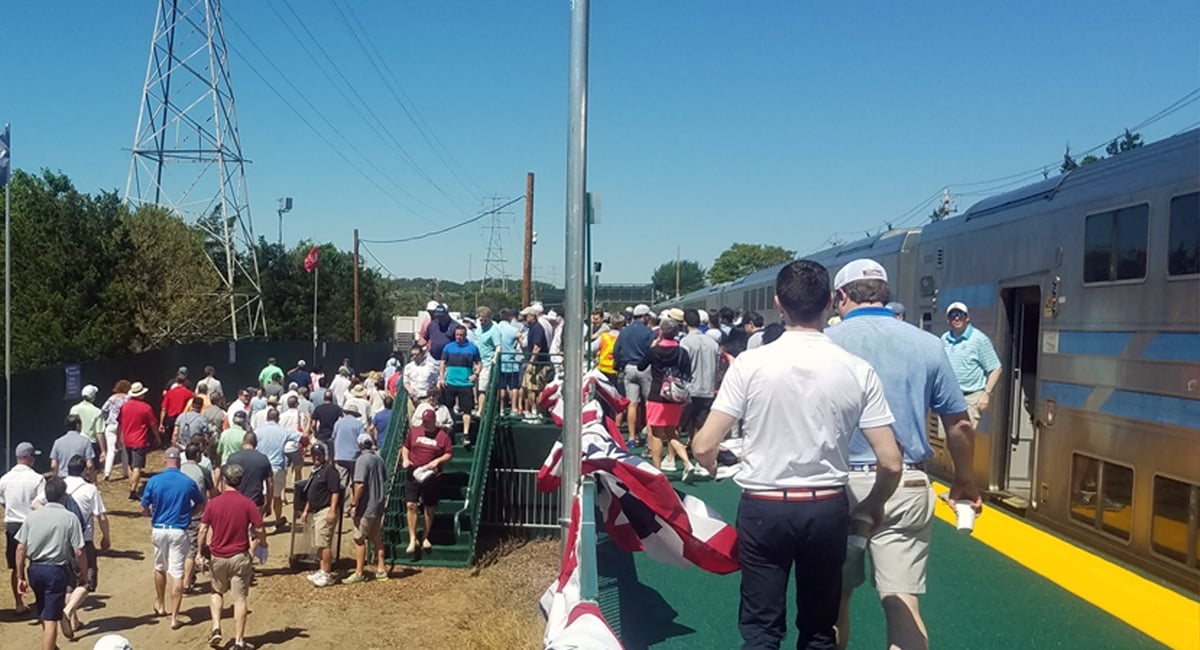 The platform, connected to Penn station by the MTA Long Island Rail Road, operates from June 7 until June 17 after the conclusion of the U.S. Open. To commemorate the opening, LIRR president Phillip Eng delivered the tournament’s trophy by hand using the train service.

“Taking the train is going to be the fastest and easiest way to literally get within steps of the U.S. Open,” said managing director Reginald Jones in Newsday interview.

The LIRR system is the most efficient way to travel to not only Shinnecock Hills, but to all kinds of destinations around Long Island. “The Long Island Rail Road is the perfect way to enjoy a relaxing, car-less and eco-friendly visit to Long Island’s many famed beaches, golf courses, wineries and more,” said Jamie Claudio, VP of Marketing & Sales for Discover Long Island. “Travelers are becoming increasingly savvy in utilizing public transportation and ditching the car in favor of more convenient modes of transportation. With many walkable towns and villages around the Island, arriving at your vacation by train means less time spent on the roads and more time spent enjoying the experiences you came for.”

Never before has it been this simple to come so close to a premier event like the U.S. Open. One can take advantage of LIRR’s convenient opportunity to experience Shinnecock Hills by taking an Amtrak train to Penn Station.

Take Amtrak to the U.S. Open at Shinnecock Hills

Experience the 2018 U.S. Open via Amtrak to Penn Station in New York City—Don’t forget to use the New York By Rail 15% discount! From Penn Station, connect to the MTA Long Island Rail Road for a convenient ride to a temporary platform just outside the event. Available from June 7 until June 17, a number of trains will make stops at the temporary station throughout the day allowing attendees to come and go at their convenience.