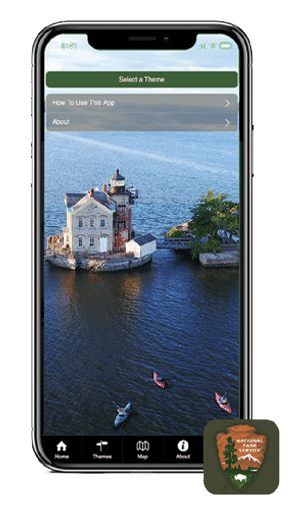 Is that a castle in the middle of the river? If you’re asking this question on the train in the vicinity of Beacon, then the answer is “yes”. It’s Bannerman Castle, one of many intriguing sites you’ll see along from the train between New York City and Albany. You’ll also notice a number of bridges, lighthouses, estates and picturesque landscapes.

Using location services, the app will tell you about the sites you’re approaching in real time. Another entertaining feature is the “Voices of the Hudson” audio series. Listen to stories about each place as you watch from the train’s window.

One more thing about Bannerman Castle: The island where it’s located is said to be haunted by Native Americans and Dutch colonial settlers. You can take a guided ghost tour to learn more!

The app, produced by the Hudson River Valley National Heritage Area, can be found on Google Play or Apple Store. Search for Hudson River Train Tour.