A train enthusiast takes Amtrak to Utica for a haircut at the Union Station Barber Shop and stays at the historic Doubletree by Hilton Hotel Utica amid the coronavirus outbreak. 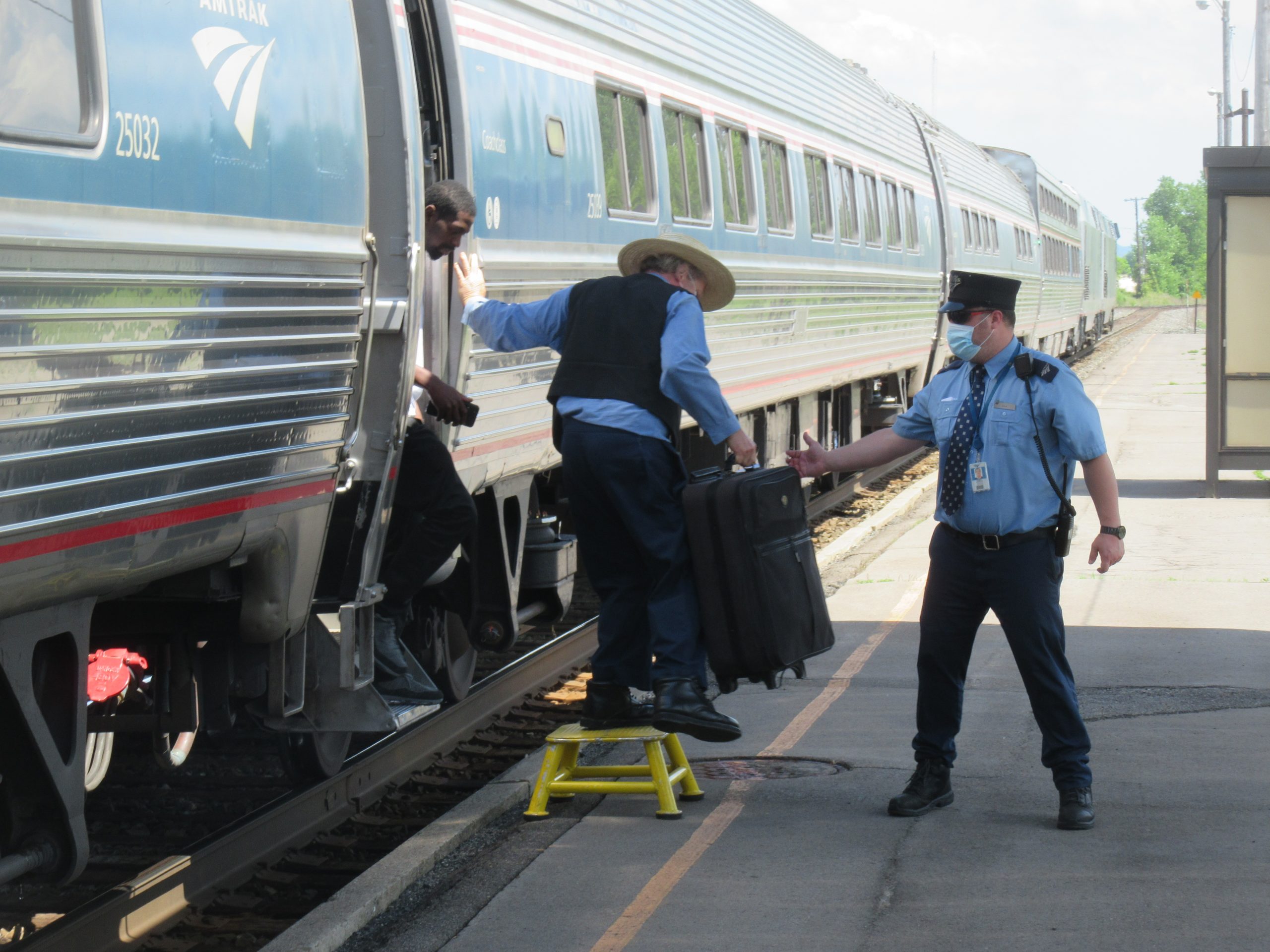 Amtrak is requiring face masks during the coronavirus pandemic to ensure the safety of its customers.

Between my last haircut in January and my cancelled March appointment, my hair became like wearing a sweater. While mostly in isolation, outside life was keeping an eye on a horse, tending to a veggie garden, and indoor – binge watching of movies. I was seeking an escape.

A haircut was desperately needed.

After learning that parts of Western and Central New York were doing some opening with new safety protocols, I knew where to get my haircut. Utica, NY had the Union Station Barber Shop, and the historic Doubletree by Hilton Hotel Utica, a ten-minute walk away.

Deciding I Wanted to Travel

I knew I wanted to go on a trip. I saw the crowded plane videos – nope, not that, not yet. Amtrak made more sense. I had already ridden Amtrak to a doctor’s appointment, and knew I felt more comfortable with the train’s flexibility. For example, if you’re uncomfortable in a given area, you can easily move.

My travel supply consisted of masks, wipes marinated in alcohol and wearing some clothes to discard in Utica. My food supply included some of my favorite snacks, as I anticipated limited food and drink options due to closed establishments. However, there ended up being many Utica establishments with welcome signs for openings again with increased precautions.

I took safety measures like avoiding close contact with people and frequently using alcohol-soaked wipes for not only my hands, but doors, elevator buttons and food wraps as well. 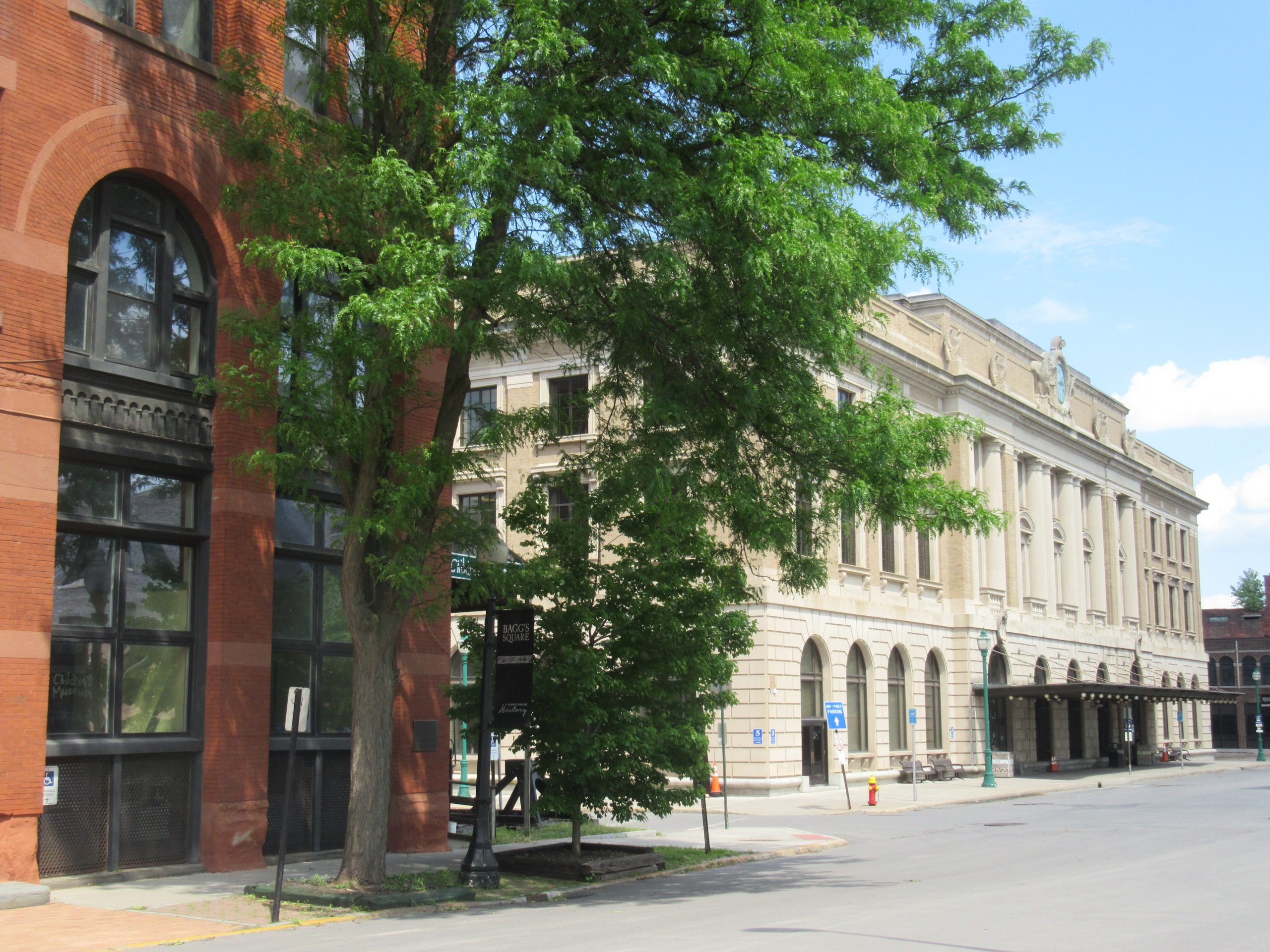 Why Utica?Utica is among a string of upstate and western New York cities showing some signs of development and reopening. Roughly five million people live within this corridor, yet there is plenty of open space. Utica is a friendly city with a small-town feel. It’s common for strangers to exchange greetings on the street and people converse easily.

In talking with the good people of Utica, aka Uticans, I received plenty of COVID safety tips and ideas. How foolproof? Who knows? I’m actually using some, but nothing radical. Here’s some of it:

“While riding an elevator or if I feel I’m in a compromised area, I now inhale a wipe letting a whiff of fumes into my respiratory system.  Drinking liquids, ideally green tea, supposedly washes down COVID, where acids can end any live virus in the stomach. After being outside I immediately shower and put clothes in the laundry. Minimizing doorknob contact, especially in high trafficked places, was among some of the other the suggestions. Uticans also offered plenty of COVID jokes. No Clorox. Stepping on sidewalk cracks”? 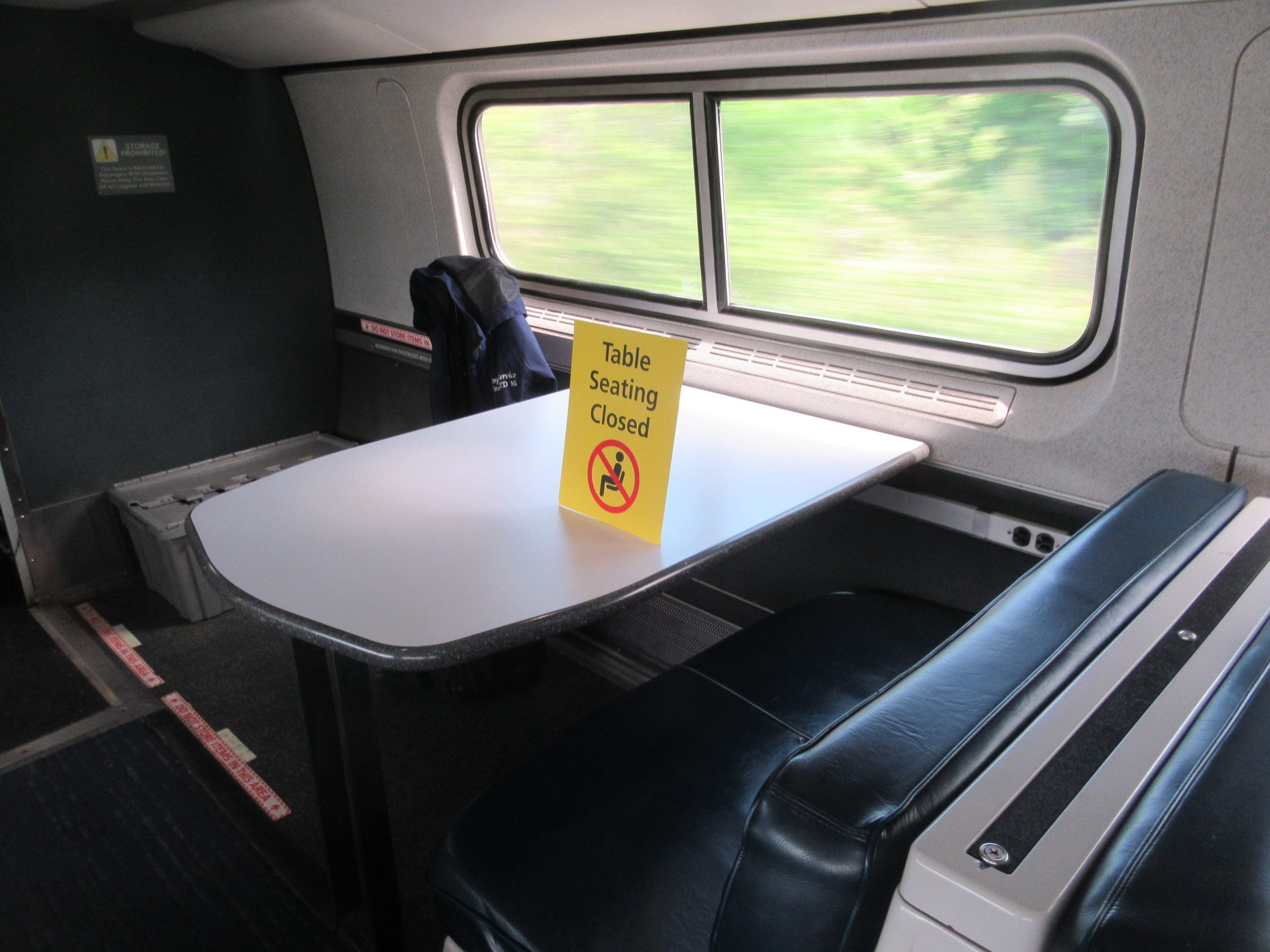 Amtrak is increasing signage to ensure social distancing measures are up to par.

Heading out to the station, I thought about how currently many areas close to New York City are mostly not very welcoming to outsiders, as localities try to manage their own social distancing issues. I thought to myself a trip much further away from the New York City area was a good idea.

Soon, I began relaxing as we headed northbound along the Hudson River, into the Hudson Highlands and the later distant Catskill Mountains. I had a chance to truly enter my thoughts in a rare solitude with a constantly changing view. Gazing at the scenery, I saw a quiet work of nature. Waterfowl was plentiful: kayakers on the Hudson, people fishing, tugs & barges, sailboats and an Erie Canal style mini tug.

Among my favorite pleasures of the trip west, is the left turn leaving Albany-Rensselaer. Train 281 turns westward crossing the Hudson River and it feels oddly symbolic. From here, Amtrak continues on straight to Chicago, or the Rocky Mountains or California after switching trains. Memories of numerous past western trips returned to my mind here.

While the main reason for my train journey is a haircut in upstate New York, the trip reminded me of savored memories, which are part of this trip’s package. 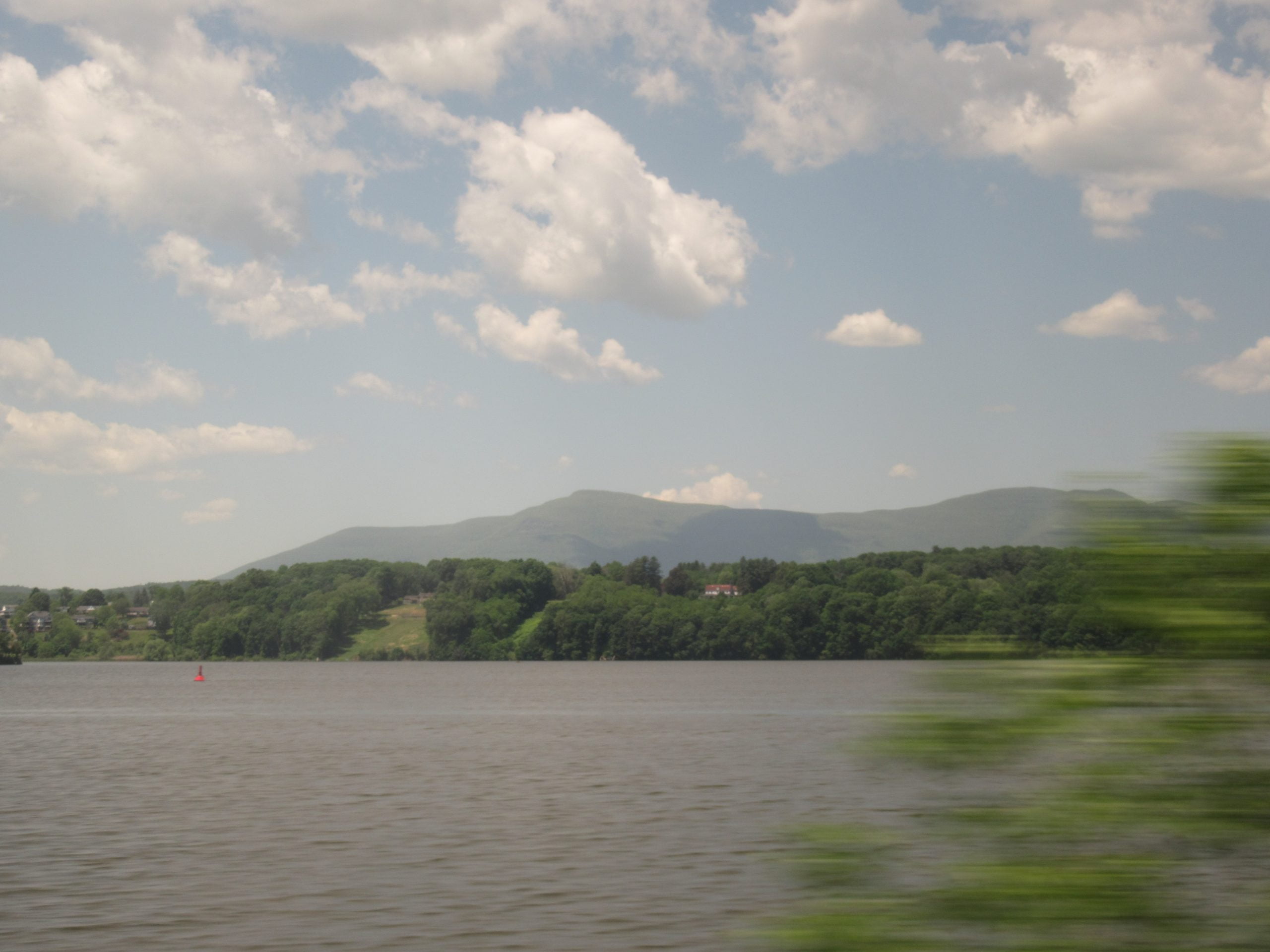 A view of the idyllic Catskill Mountains looking through an Amtrak window while riding along the Hudson River.

More Pleasant Sights from the Train

The Mohawk Valley sights from the train are often overlooked. The valley rises west towards Utica and remains a breadbasket and agricultural region, with numerous old factories and granger villages braced along the Mohawk River – one of the headwaters to the Hudson. The region remains largely rural and wooded with the Adirondack wilderness to the north and the Catskills south.

Some Amish communities have formed here, and are loyal Amtrak riders, often using the Amsterdam and Utica stations. This region also consists of some of the heartland of the Six Nations of the Iroquois.

Additionally, The Dutch began venturing the New York around 1620, then the new Dutch province of New Amsterdam, followed later by more waves of other nationalities seeking their new world here. Some artifacts in the area date back to 10,000 years.

Nearing Utica we have risen to plateau level of the interior, where buffalo, or American Bison, once roamed. While it’s yet to be determined how far east Bison went, they were hunted out of New York State in the 1800s. 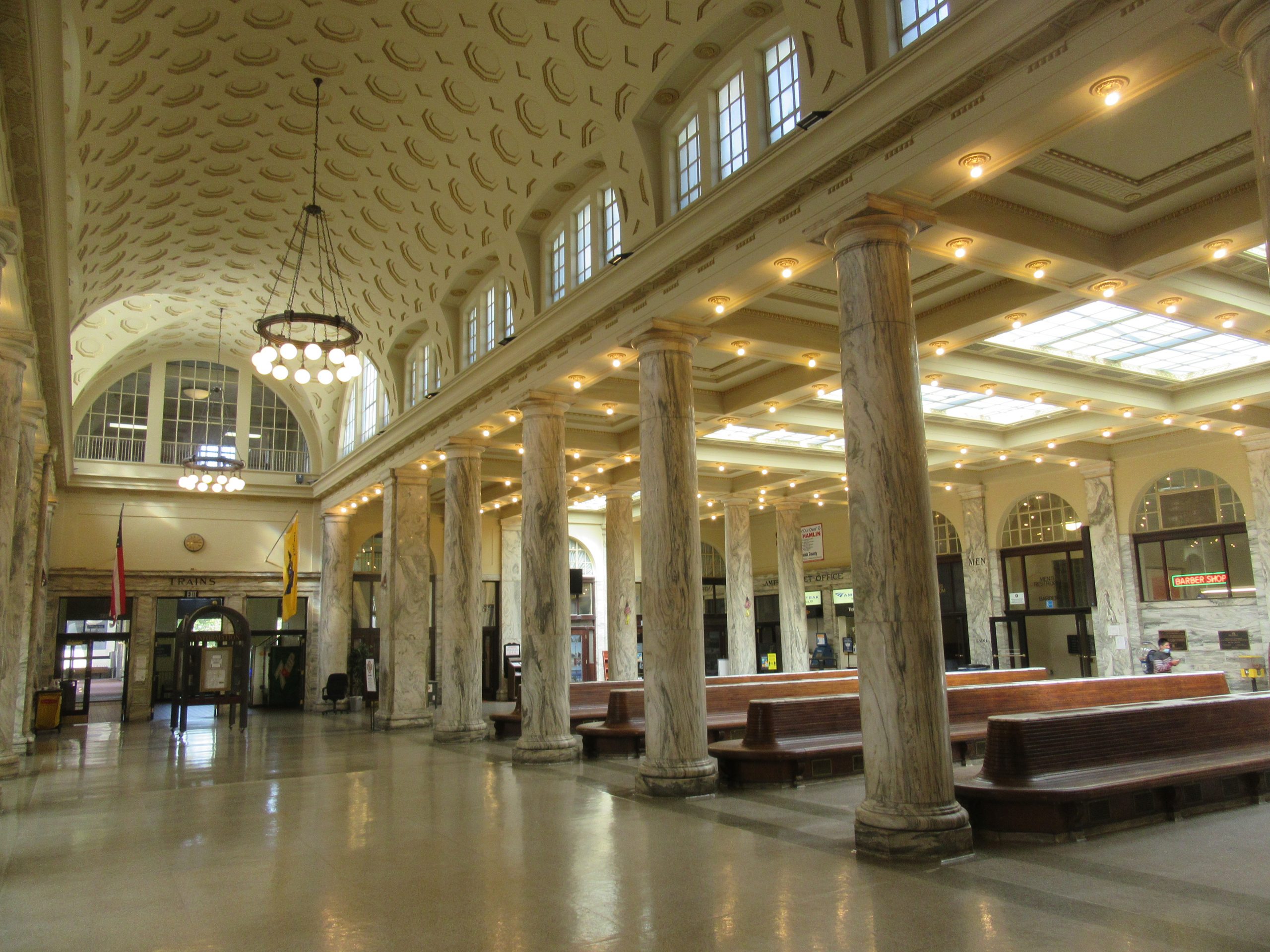 The train conductor’s announcement for Utica station gave me a few minutes to get ready. My thoughts were mostly concerned about getting close to people. Yikes.

Utica passengers wore their masks in the aisle. If you didn’t wear it, the conductor would indeed remind you. We stayed a good six feet apart, maybe even ten feet. Some forgot and some politely reminded.

We arrived at Utica a few minutes late, but close enough to our scheduled time. I thanked the crew, and asked them to thank the train dispatcher for bringing us to “Track-2,” meaning no bridges or steps. It also is curbside and a two-minute walk to the barber. 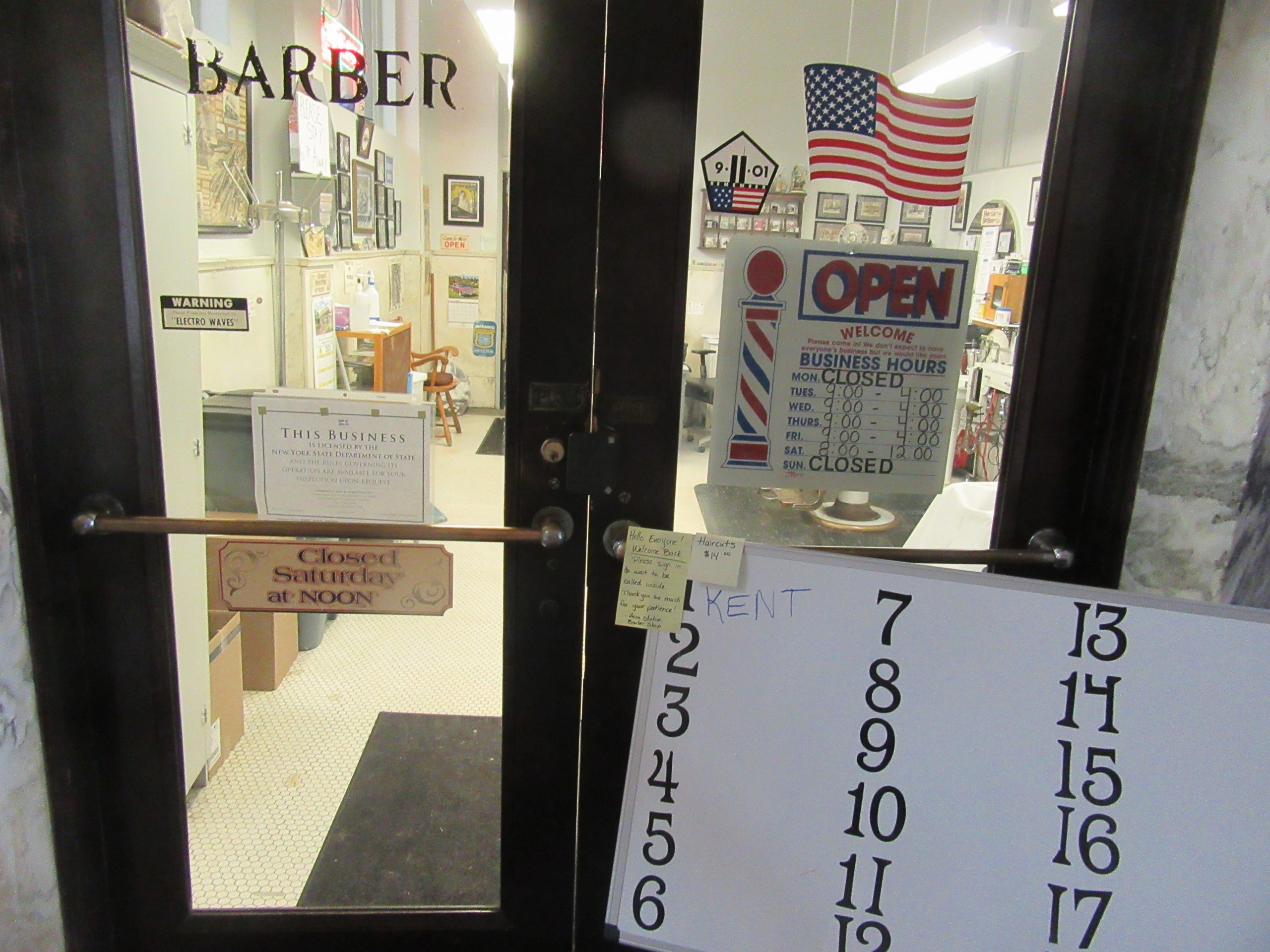 Customers wait outside Union Station Barber Shop with only one customer entering at a time.

Union Station Barber Shop, is the last of three such original depot establishments left in the United States. Haircut waits were outside the shop for safety, as the large spacious 1914 built station waiting room remained empty.

The Barbershop kept a list for those to sign in with an erasable marker. There was just one head to trim before me. Within ten minutes, the barber (masked of-course) and I were in the shop. I got a buzz-cut. Soon it was over and I looked like an escaped prisoner. 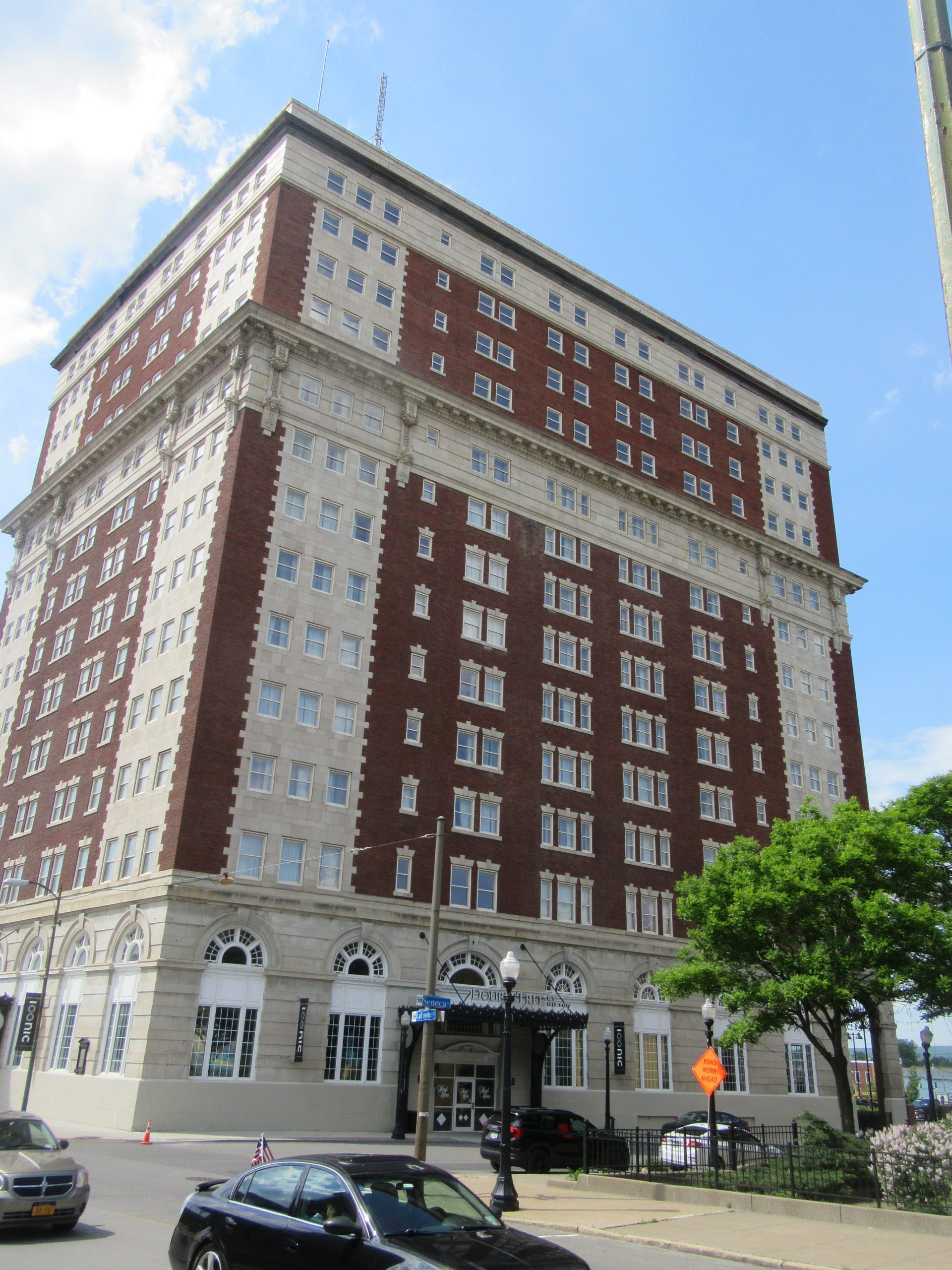 Exploring and Staying in Utica

Under a ball cap, I explored downtown Utica. While the seven cities along this route, including Schenectady, Amsterdam, Utica, Rome, Syracuse, Rochester and Buffalo, are, in my opinion, past their primes, they still have potential with new development happening. Winters are cold, but there’s space, land and forests nearby. Agriculture, wine making and an organic and gourmet food culture is fast taking hold. Real estate up here is still cheap, but that is changing upwards as some areas are returning to prosperity, such as Schenectady. Striking old architectural specimens are still plentiful in all of these cities. They are also good walking towns!

Even on an 85-degree day, it had a similar ghost town feel because of the coronavirus. However, some new shops, cafes and businesses have come here since my last trek around town several years back. After a round-about walk to the Hotel Utica by Genesee Street, now a Doubletree by Hilton property, I was in my sanctuary: a sanitized hotel room with takeout food.

The 1914 landmark hotel seemed to promote that it was fireproof, a major selling tool of modern hotels built then. The fourteen story Hotel Utica was built with just 16 rooms per floor, three elevators, plus three staircases all just steps from your room.

While the restaurant was temporarily closed, there was delivery alternatives. Also, available 24/7 was a small kiosk for snacks, food and ice-cream. When I returned to the room, a great sunset was visible. The view seems to go west forever.

Breakfast was limited to packages of muffins, bagels, yogurt and coffee. No room service for now. After the light breakfast, I headed back towards the station. 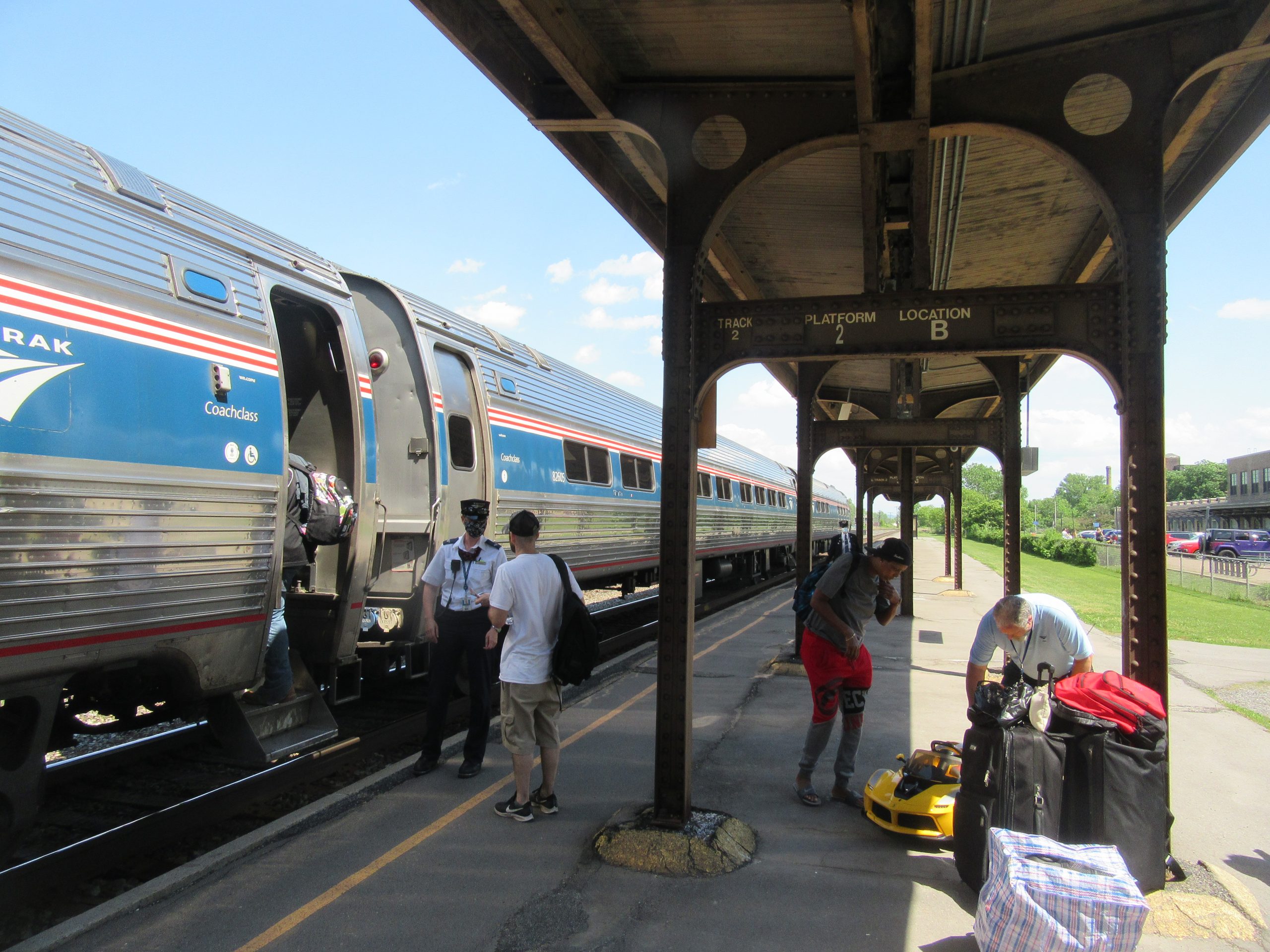 Customers remain at a distance while wearing face masks amid the coronavirus.

Traveling was easy. And, since Amtrak won’t book more than 50 percent of seating capacity, there is some peace of mind and less anxiety or stress. It’s not jet-setting but it is very relaxing. I wrote this returning eastward, often glancing over Mohawk Valley, which hasn’t changed much in two hundred years. Later, I had a drink and unwinded, simply watching the world, a sight unseen for months.

Experience Utica via Amtrak to Utica Station in Central NY —Don’t forget to use Amtrak’s See New York and Save 15% discount!

Rent a car with Enterprise! Pick up your reserved NYTRAIN Enterprise Rent-a-Car right at Utica Station. Call the Enterprise office in Utica: 315-736-0002. Use discount code NYTRAIN.