Recent University of Buffalo graduate travels on Amtrak during the COVID-19 era to get home for her supposed college graduation weekend. Here's what she wants to share.

Traveling during a pandemic would provoke uncertainty or even fear for most, but when it is your supposed graduation weekend and you do not have a suitable car, traveling via Amtrak is still a good and safe option.

My college graduation from the University at Buffalo was planned for mid-May. I have stayed at school to focus on online classes and make the most of my senior year. However, with graduation weekend fast approaching without the traditional in-person ceremony, the thought of spending it without my family was somewhat depressing. After a breakdown on the phone with my mother, I ultimately decided it would be best to come home for a few days to celebrate the end of my college career with my family. 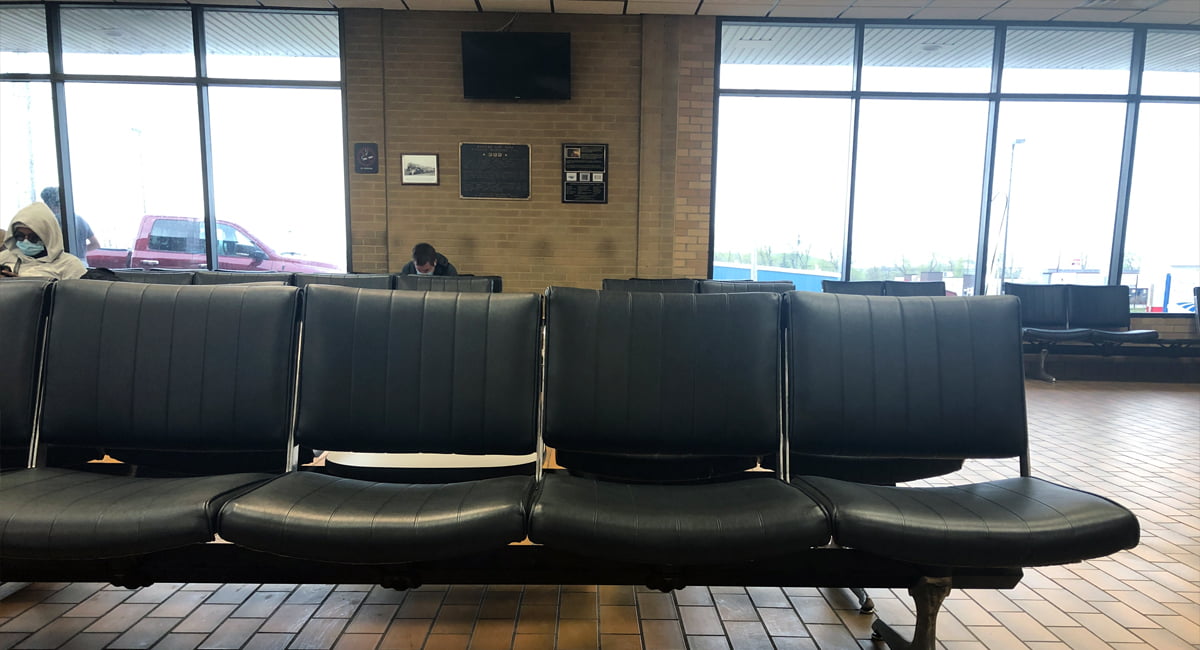 Early Friday morning, I took Amtrak’s Empire Service Train 284, from Buffalo-Depew en route to Poughkeepsie. When I arrived at Buffalo-Depew Station, the first thing I noticed were the signs on the entrance doors. They read “Masks Are Required.” The signs also mentioned maintaining the six-foot distance rule from others.

The Buffalo-Depew Station appeared remarkably less crowded than what I usually experience. As a regular Amtrak passenger for years, this was the emptiest I have seen any Amtrak train station. Fortunately, all passengers were adhering to Amtrak’s new safety protocols of wearing masks and keeping proper distancing from one another. This was a reassuring sight and made me feel more at ease while I waited to board the train.

As the train arrived at the station and we lined up to board the train, it was comforting to see all conductors wearing masks. The first car I walked into only had one other person. I noticed a sign that said masks were mandatory while on board, however, it appeared that masks only had to be worn when walking around the train. After I found a seat, I took off my mask and noticed other passengers doing the same. I did, however, put my mask back on when the conductor came around to scan tickets. This was not required, but I figured it would make him more comfortable as we were closer than six feet from each other. 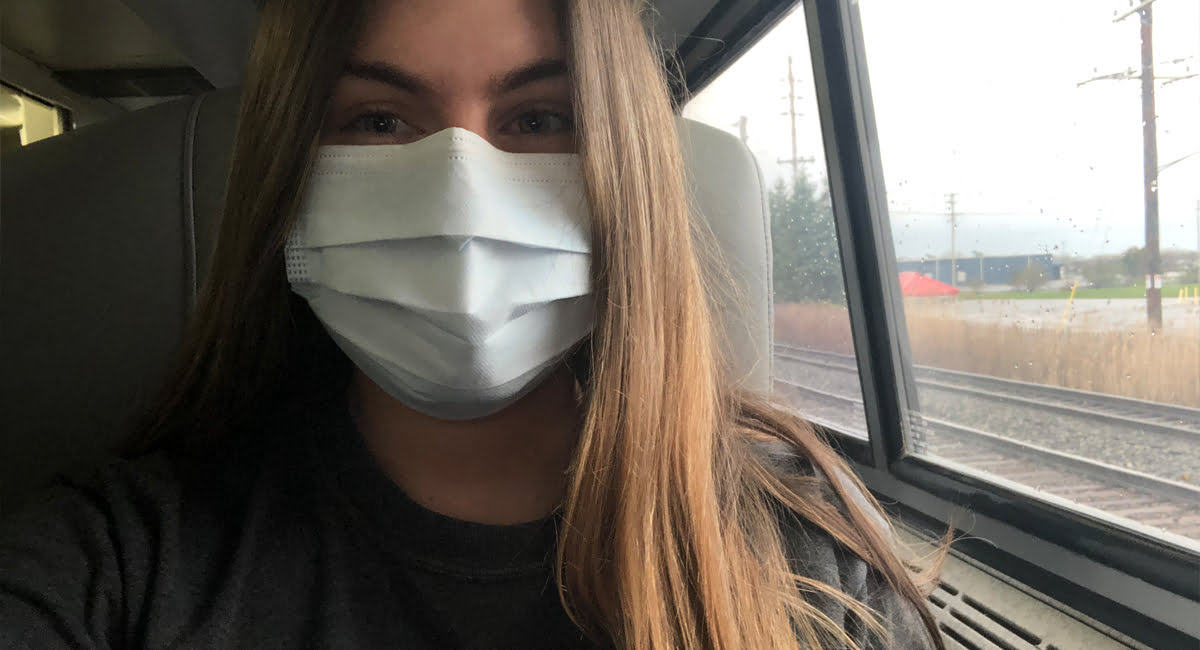 Mackenzie Martinelli snaps a photo of herself sporting protective gear while traveling during the COVID-19 pandemic.

The first thing I always do when I find my seat on Amtrak is check the latest edition of New York By Rail magazine. I usually flip through it, even though I have already read it. The first thing I read is “From the Publisher,” as it happens to be written by my father. I usually send a picture of the magazine to my dad, along with a few sarcastic comments about why I’m not featured in his letter. However due to Amtrak safety protocols I learned that magazines are no longer being placed on the trains.

By Syracuse, the train began filling up more and passengers continued to have their own set of seats with no one sitting directly next to one another. I understand Amtrak is only selling a maximum of 50% of train capacity, allowing passengers to feel more at ease to take the train again. I noticed a lot of young adults sporting college apparel getting on the trains with numerous bags and assumed they were mostly students going home. I only noticed a handful of families with children which seemed somewhat unusual from past Amtrak trips.

As we got closer to Albany, I became hungry and figured this was a good time to visit the cafe car to get lunch to beat the rush of anticipated passenger boarding at the Rensselaer station. To my disappointment the cafe car was closed until we left Rensselaer. There were signs, however, in the cafe car indicating service was take-out only and a mask was required while ordering food. I went back later and was pleased that passengers were observing the mask requirement as well as properly social-distancing while awaiting service. 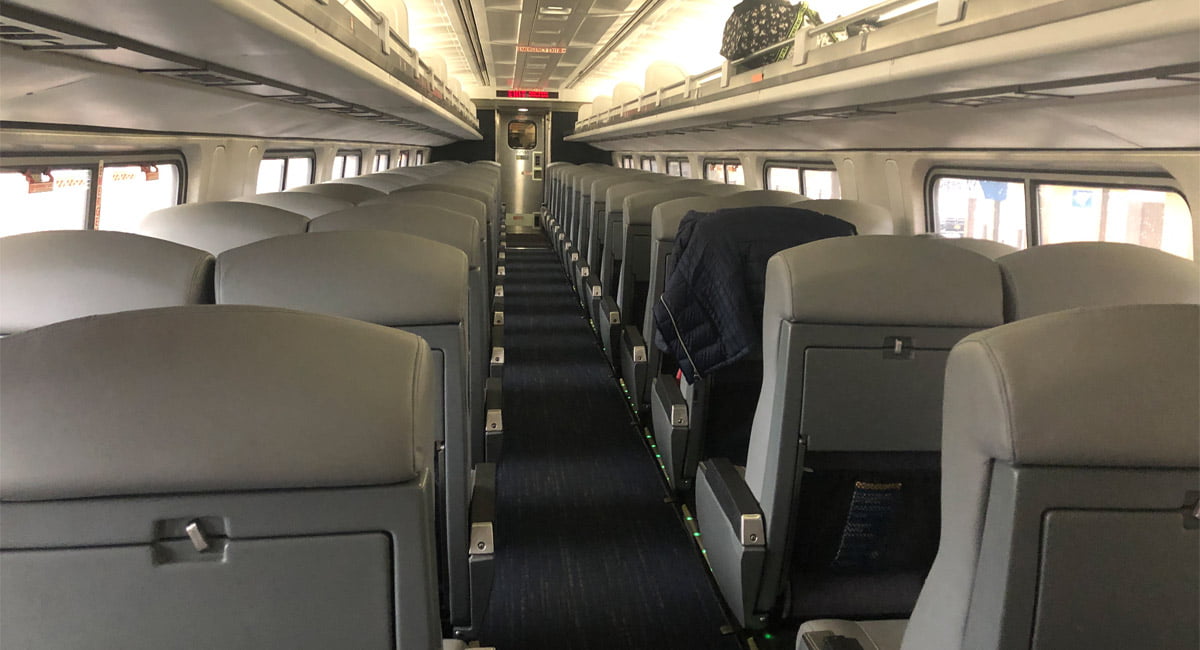 Mackenzie’s train car initially had only one passenger due to the COVID-19 outbreak.

A favorite way for me to pass the over six hour train journey is to catch-up on Netflix programs since Amtrak provides complimentary WI-FI service. To my delight, the WI-FI coverage was a lot faster than previous train rides. I assume this has to do with a lower capacity of passengers consuming the service. This allowed me to catch-up on more of my favorite shows as I fell behind recently due to deadlines for completing my coursework.

Stops Along the Train Ride

At every stop along the way, I took notice of what the station platforms looked like. Almost all of them were bare and some had no passengers at all. This was unusual as I normally witness many people eager to board at each stop.  Once we arrived in Albany, all of the station workers wore masks. A handful of riders got off on the platform to stretch or have a smoke during our short layover and I noticed each of them making more of an effort to keep their distance from others. During the approximate ten minute break until the train departed I noticed less than normal amount of passengers getting on the train Albany. This is likely due to less business passengers heading into New York City.

After we departed Rhinecliff, the conductor made an announcement that Poughkeepsie was the next stop in 20 minutes. This was my cue to finish watching Netflix and that it was time to pack my bags for the impending train departure. Looking out the window it was great to see some of my favorite sights again along the Hudson River – including the Rondout and Esopus Lighthouses, Mount St. Alphonsus Monastery and The Walkway Over the Hudson Railroad Bridge. When we finally arrived at the Poughkeepsie Station, I was among only a handful of passengers getting off. The station appeared empty and there were almost no cars in the usually filled parking lot. As I made my way into the station, I discovered the waiting room upstairs was closed. I wasn’t surprised. However, I was glad to be finally home again and ready to celebrate with my family during a long weekend. 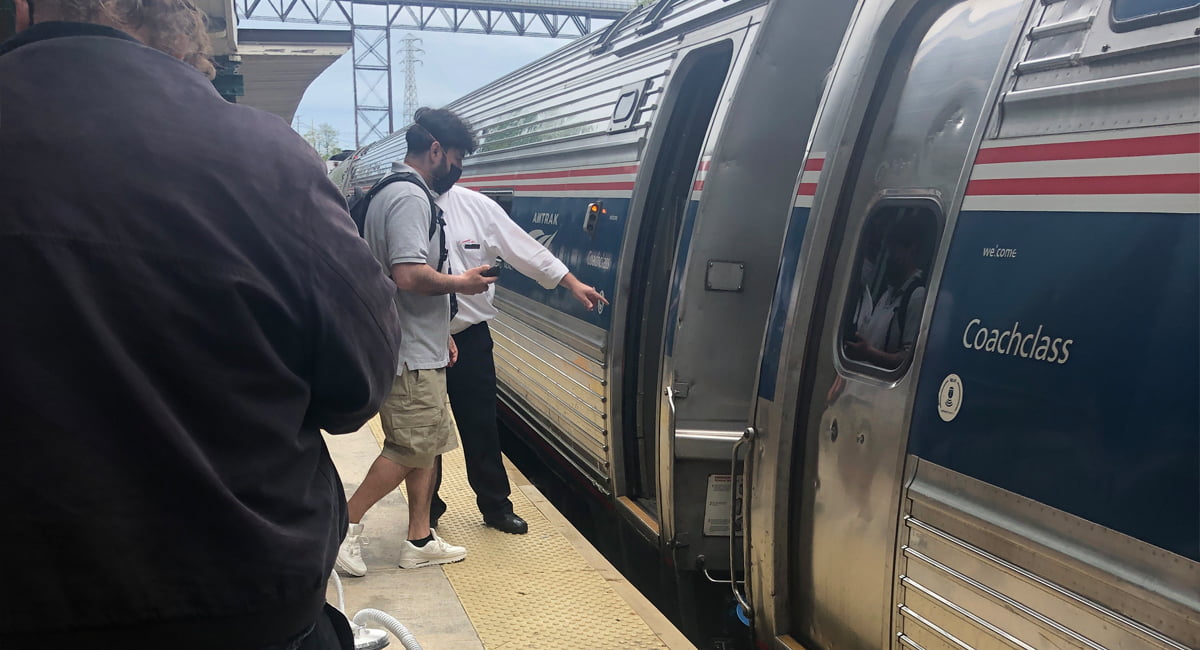 While first making these travel plans, I was nervous about what travel was going to look like during the COVID-19 era. Yet, traveling on Amtrak was easier than I imagined during the coronavirus outbreak. Luckily, everyone throughout the train ride practiced social distancing and wore a mask. My Amtrak trip was surprisingly normal, minus the masks and lesser capacity. If there comes another time where I need to get home, I would definitely continue to use Amtrak as my means of travel. Amtrak’s commitment to passenger’s safety, including new protocols and decrease in capacity, allows for a safe and relaxing ride.

Students age 13 – 25 with a valid student ID are eligible for 15% off the lowest Value or Flexible Fare when you book your travel at least three days in advance.

This offer is exclusively available via iloveny.com and amtrak.com. To claim this offer and see the Terms and Conditions, click here!