Central Park has always been an escape for both Manhattan residents and visitors to enjoy the outdoors and seemingly get away from the high-rise buildings. Now, more than ever, the Park is a space to physically and mentally recharge during an otherwise unsettling time. Here are a few remote options within Central Park that would make for an ideal getaway.

Central Park Conservancy is closely monitoring the COVID-19 situation with increased protocols to ensure the health and safety of guests. Find out more information below. Here is an inside look at the hidden gems of Central Park.

For decades, I’ve been enjoying the sprawling greenery of Central Park. My favorite places include The Pond at the south end of the park, for bird-watching; Turtle Pond by Belvedere Castle, because I love that Manhattan has a waterhole that teems with turtles; Loeb Boathouse near the Bethesda terrace and fountain, when I feel like rowing beneath picturesque Bow Bridge instead of strolling over it; and Wollman Rink, when I want to ice skate. To me, nothing beats Wollman Rink for skating in New York City, not even the rink at Rockefeller Center.

Recently, I realized that whenever I visited Central Park I gravitated toward my usual haunts with such regularity that I had stopped exploring other areas of the park. I made a list of several destinations to check out, then spent a day visiting each of them. My excursion took me to much of 840 acres of the park, during which I discovered these secret gems:

I started my day looking for the Hallett Nature Sanctuary, a woodland that was recently restored. It’s nestled between Wollman Rink and The Pond, near East 62nd Street, toward the south end of the park.

Although the sanctuary has been open since 2013, I’d never stumbled upon it. It’s tricky to find because it has only one entrance, which opens at 10:00 a.m. and is locked just before sunset. When I arrived at the rustic wooden gate, it was still locked, but it was almost 10:00 a.m.. Moments later, I was the first person to enter that morning.

I hiked up and down the log-lined mulch paths, rarely seeing another person. The chirping birds drowned out the sounds of the city. I wandered for half an hour, enjoying every viewpoint. The higher ones had excellent cityscapes. The lower ones overlooked The Pond, where I glimpsed ducks swimming by. The longer I walked through the peaceful nature sanctuary, the more I convinced myself that I was hiking in the woods in upstate New York. Eventually the path took me back to the entrance, and suddenly I was back in Central Park again. 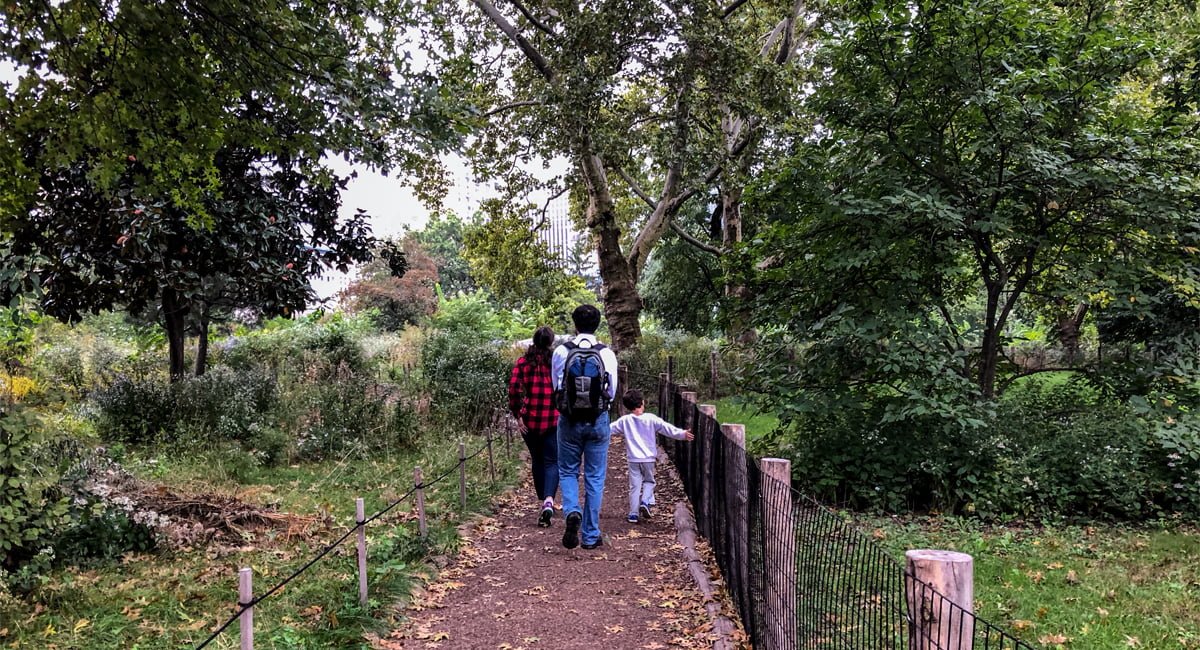 In 2017, the Central Park Conservancy finished restoring Dene Slope, turning the space near 66th Street on the east side of the park into a hillside meadow brimming with native wildflowers. The meadow is quiet and sparsely populated, unlike the nearby Central Park Zoo and running paths.

Dene Slope is home to a variety of native wildflowers that bloom white, yellow, pink, magenta and lavender. I’d never seen so many monarch butterflies flitting around one area of Central Park until I entered this meadow.

Dene Slope is not only an ideal spot to witness nature, but also for people-watching. Toward the top of the hillside, a man meditated on a gnarled wooden bench amid the butterflies, birds and crickets. When I reached the Slope’s highpoint, a hump of exposed bedrock, a young couple was taking a selfie with the Manhattan skyline behind them. 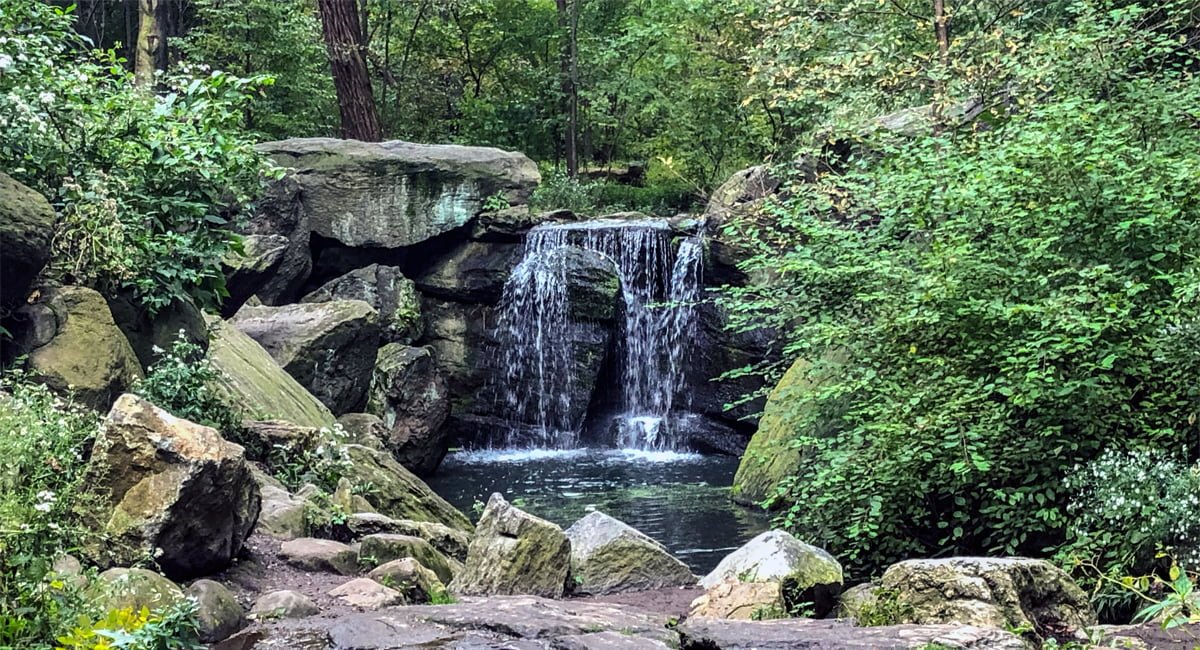 Before I began investigating Central Park’s hidden treasures, I thought that I had to head to upstate New York or the Poconos to see waterfalls. Then I learned there are several waterfalls along the Ravine Walk, a path that runs through Central Park’s North Woods. I headed to West 102nd Street toward the eastern edge of a small pond, called The Pool. Surprisingly, I heard rushing water.

The Ravine Walk is a pleasingly secluded path that meanders along The Loch, a stream that runs from the Huddlestone Arch near 105rd Street to Glen Span, another arch near Lasker Rink, an ice skating and swimming destination. Along the way, there are a half-dozen waterfalls of varying heights, as well as the two impressive stone arches. As I walked, chipmunks ran across the path, and the thick woods made a canopy over me. I could hear only chirping birds and burbling cascades.

I couldn’t decide which waterfall was my favorite, but I was impressed by the height of the two tallest ones, both about eight to 12-feet high. One was by the Glen Span Arch. The other was near a clearing paved with large flat stones.

I’d heard about a 19th Century log cabin, called the Swedish Cottage, near West 79th Street and Central Park West at the foot of the Shakespeare Garden, and wanted to see it. This two-story cottage looks like an old Swedish schoolhouse, with butt-and-pass corners and tall, arched windows.

The historic structure was built in Sweden for America’s Centennial Exposition, in 1876 in Philadelphia. A year later, Frederick Law Olmsted, co-designer of Central Park, moved the cottage to its current location. After serving as a children’s nature center, an entomology lab and several other uses, in 1947, it became the headquarters of a traveling marionette theater.

In 1973, the park built a permanent marionette theater inside the cottage. Since then, thousands of families have enjoyed productions like Peter Pan and Cinderella. 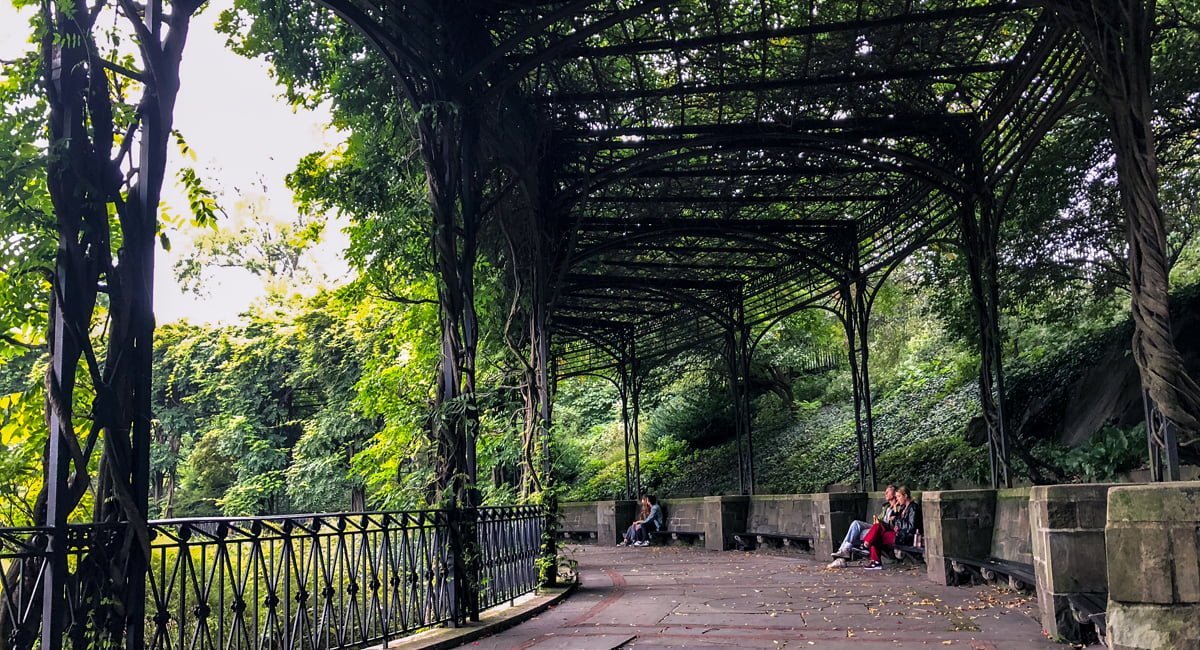 My last stop of the day was the Conservatory Garden in the northeast corner of the park, which covers six acres and boasts three formal gardens. The gardens were painstakingly designed in three different styles: Italian, French and English.

After the Ravine Walk, I stepped out of Central Park at 110th Street and Lenox Avenue and walked east, then south along Fifth Avenue, because I wanted to approach the Conservatory Garden from outside of the park. The pay-off for the extra two-minute stroll was entering the garden through the majestic, wrought-iron Vanderbilt Gate on Fifth Avenue between 104th and 105th Streets. The ornate gate serves as a visual entryway to the garden, perfectly framing its centerpiece fountain.

I went down a flight of stairs to the Italian-style garden at the heart of the Conservatory Garden. Between the fountain and me was an expansive lawn bordered by rectangular topiary hedges. Behind the fountain, a pergola overgrown with wisteria vines served as a lush backdrop. Enticed by the verdant archways, I climbed a flight of stairs to sit on a bench beneath the vines and listened to the rushing fountain.

After a five-minute rest, I continued north into the French garden, which was designed with circular paths. Several arched trellises led to the center of the garden with its stately sculpture of three dancing women. Bright blue, pink, yellow, orange and purple blooms liked the pathways. Some of the flowers were only ankle-high, while other plants towered over me.

Next, I walked south to the English garden. A variety of flowers, shrubs and craggy trees lined its stone walkways. I headed for the fountain at the center of it, which pays tribute to the classic book, The Secret Garden, written in 1922 by Frances Hodgson Burnett. In the book, an orphaned girl goes to her uncle’s English estate where she meets her disabled cousin, a boy her age. The two youngsters find purpose and happiness when they begin tending an overgrown garden on the property. Fittingly, I found sculptures of a girl and a boy overlooking the water, which was strewn with lily pads.

The Conservatory Garden was my last stop in Central Park, but only for that day. I had discovered five sanctuaries in the city, all places that I’m eager to return to and share with my friends and family.

How Has the Coronavirus Affected
Central Park?

Central Park Conservancy staff are cleaning and conducting routine maintenance of landscapes, water bodies and benches in order to keep the Park open as a place of solace.

Follow proper safety protocols including washing your hands with soap and water before leaving for the Park, stay six feet away from others, wear a mask or face covering, use a tissue to cover your nose and mouth when sneezing, don’t touch your face with unwashed hands.

Avoid gathering in small or large groups when coming in contact with individuals of your own household.

The Great Lawn, Sheep Meadow and the North Meadow are open for passive solitary use only.

The lower portion of the East Meadow is closed until further notice.

Restrooms maintained by other organizations and in areas that require an admission fee, in addition to the restore at Ancient Playground and Robert Bendheim Playground are closed until further notice.

In-Park tours and programs are on pause until further notice.

Please stay home if you are sick or feeling unwell.

For the Swedish Cottage, from the 34th Street Penn Station subway station on 8th Avenue, take an uptown C train to the 81st Street-Museum of Natural History station.

For the Ravine Walk, Conservatory Garden, from the 34th Street Penn Station subway station on 7th Avenue, take an uptown 2 or 3 train to the Central Park North (110th Street) station.