To honor the rich and long history of the city, people are coming together to host events across the area to celebrate Niagara Falls’ 125th Birthday. The City of Niagara Falls came to be on March 17, 1892 when Governor Roswell P. Flower signed a bill to create the city on Saint Patrick’s Day. The city was originally formed from the villages of Manchester and Suspension Bridge. During the 20th century, tourism steadily increased up until the Love Canal contamination in 1978. This disaster gained national media attention, causing the population to split in half and tons of factories to close up and move elsewhere. Since then, the falls have become a famous tourist attraction and the city has improved their economy and image in the public eye.

What to Do at Niagara Falls’ 125th Birthday

Niagara Falls’ 125th Birthday gives its people tons to do throughout the year to show praise for the city and its history. Whether it is the staff of the Niagara Falls Courtyard Marriott, Niagara University’s President Fr. Mahar, or the Niagara Falls Memorial Medical Center honoring the city’s birthday, there are representatives and events all over supporting this great appreciation for the city. Celebrations take place at various events including the Woman’s March, Community Appreciation Day, or Unity Day. These events help not only support their respective purposes, but also try to include local history, art, and culture to give further knowledge on the history of the city. Check out one of these events and make sure to be apart of the great community of Niagara Falls. Don’t forget to look for the 125th anniversary poster!

Enjoy some great celebrating from New York via Amtrak to Niagara Falls Station in Niagara Falls—Don’t forget to use the New York By Rail 15% discount! 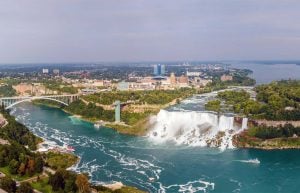